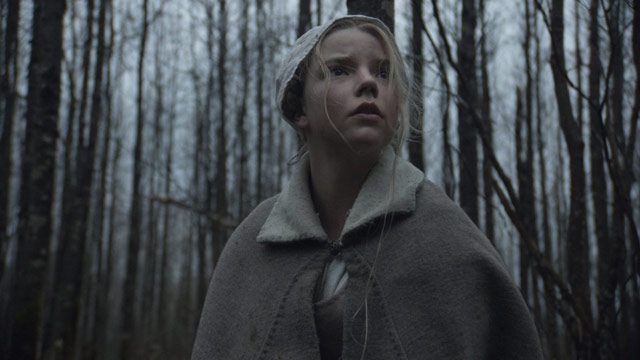 The arrival of Robert Eggers’ debut feature marks the beginning of the end of cinema’s winter-season doldrums. A darling of the 2015 festival circuit, The Witch garnered a tremendous amount of hype and earned itself a nationwide release from indie bellwethers A24. This tale of bewitching forces in Colonial America is a richly textured horror film that should pique the interest of a broader audience.

In 1630s New England, a devout Puritan family are exiled from their community and banished to live in a solitary home on the edge of a mysterious woods. William (Ralph Ineson) and Katherine (Kate Dickie) have five children: teenage Thomasin (Anya Taylor-Joy), preteen Caleb (Harvey Scrimshaw), young twins Mercy and Jonas (Ellie Grainger and Lucas Dawson), and newborn Samuel. The clan attempt to soldier on by growing their own crops, hunting their own game, and praying for salvation from the menacing wilderness that surrounds them. But soon after their exile, Samuel vanishes into the forest in broad daylight while under Thomasin’s care. As William and Caleb search desperately for the child, other ominous events begin to occur. Animals deftly evade William’s bullets, and their life-sustaining crops fail. The already self-punishing Puritans ask what they’ve done to offend a vengeful God, and eventually start to turn on one another. Wrapped in fervent fanaticism, grief, and fear of the witching forces amongst them, the family slowly descend into madness.

Eggers’ script was drawn from a wealth of primary sources from 17th century New England, most of them involving encounters with the sinister and inexplicable. The dialogue can feel inaccessible at times, but The Witch achieves a stylish sense of hyperrealism by taking its characters’ interactions directly from historical documents. This aesthetic only works with a talented and devoted cast, and the actors are perhaps the most crucial reason why The Witch succeeds. Ineson is magnetic as he bellows out Bible verses and desperately tries to keep his sanity. Dickie is overcome with sorrow at the loss of her youngest child, and her piercing despair sets the tone of desperation throughout the film. And Taylor-Joy is superb as the developing Thomasin, who is torn between her parents’ delusions, her siblings’ distrust, and the undeniable evil lurking around her.

Eggers has little interest in the horror hallmarks of the last two decades -- there are no jump scares or CGI experiments. The Witch revels in its own milieu of Puritanical nightmare, blending together myth, isolation, and religious superstition into a movie soaked in dread. Mark Korven’s discordant score is as essential to the mood as the gothic gorgeousness of cinematographer Jarin Blaschke’s images, which fluctuate between the frightening expanse of unsettled America and the claustrophobia of this family’s calamity. These elements synthesize with Eggers’ painstaking re-creation of New England’s past to create a hypnotic and psychologically engrossing picture. The Witch presents its terror as a slow-burning spiral of anxiety, daring viewers to look away.

The Witch joins recent breakthroughs like Under the Skin, Goodnight Mommy, and It Follows as harbingers of a new breed of auteurist horror filmmaking. The genre has suffered for far too long under the constraints of sequels, adaptations, and remakes, and as the found-footage trend has run its course, cinema is ready for a new wave of stylized, immersive horror. Eggers’ shocking debut feature is the first must-see genre movie of 2016.