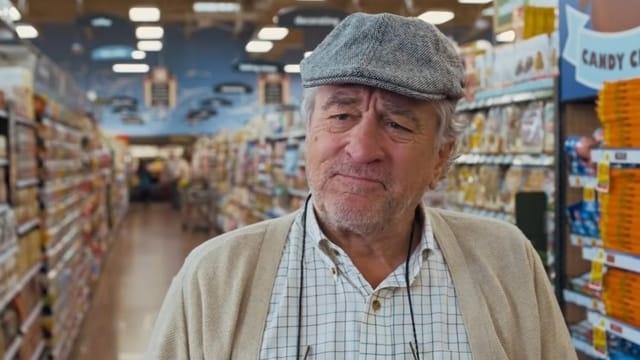 The War with Grandpa is a family comedy aimed at kids, with humor mostly appropriate for them. When Grandpa Ed can no longer take care of himself, he comes to live at his daughter’s house, where he ousts young Peter from his bedroom. Peter declares a war of physical pranks to try to get Grandpa Ed out of his room, so he can get back into it.

Recently widowed Ed (Robert De Niro) is getting older. His knees are going out, so he can’t drive or walk easily. His daughter Sally (Uma Thurman) invites him to come live with her family so that they can help take care of him. She wants to make sure that he has a room on the bottom floor, so she takes one away from her son Peter (Oakes Fegley) and fixes up a new bedroom for him in the leaky, creep-infested attic.

Peter formally declares war on his grandpa Ed, so that he can try to get his old bedroom back. But Ed is up to the challenge and invites his elderly gang of friends — Jerry (Christopher Walken), Danny (Cheech Marin), and Diane (Jane Seymour) to team up with him. Pranks are exchanged in escalating scenarios that go so far, they involve police being called.

Directed by Tim Hill (The SpongeBob Movie, Alvin and the Chipmunks), the pacing is the strongest suit of The War with Grandpa, despite a phenomenally strong cast. The characters themselves have little to do but plot revenge, enact revenge, or react as they get caught in the middle; this makes any emotional crafting here a moot point. But Hill does attempt and marginally lands some sweet, sentimental moments that would easily draw out an “aww” if it were an 80s sitcom.

Written by Tom J. Astle (Epic, Home), there’s a Home Alone vibe here, except that the older people are able to go tit for tat in dishing out some physical and emotional punishment. The paint by number script is not bad, and there are so many funny scenes penned in, that you can see sincere effort went into creating it. The sweet, sappy scenes sell the family well enough to be universally relatable, more than genuine.

Ultimately, The War with Grandpa offers a barrel of laughs with plenty of pranks that will surely be imitated by the intended audience. There are plenty of misses but enough hits to make it good enough to please people of all ages without gravely offending. It’s a good family watch that may just help remind everyone that there are plenty of families out there with worse problems.