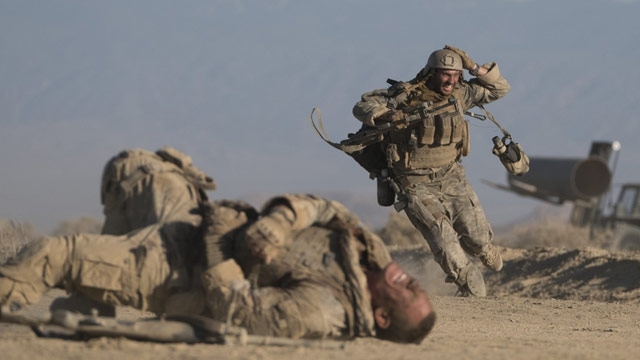 The Wall, director Doug Liman’s minimalist war drama, opens on two camouflaged U.S. Army Rangers looking down on eight dead bodies in the Iraqi desert. It’s 2007 and military efforts are winding down in the region, now that President Bush has declared victory in the war. But Sgt. Allen Isaac (Aaron Taylor-Johnson) and SSgt. Shane Matthews (John Cena) are ordered to investigate the deaths, which occurred on a construction site for a new oil pipeline, and determine if the victims were bushwhacked by local militants or if they were killed by a sniper (who may still be in the area). The two, who have been crouched on a nearby hill for 20-plus hours observing the killing field below them, begin to grow antsy, especially Matthews. “We got no movement,” he says, “not a sign of a shadow.” No sniper, he claims, would wait around this long, which makes him believe it was a hit-and-run operation. He throws caution to the wind and ventures down to have a look-see. And what he finds disturbs him.

Matthews confirms that all of the victims were killed by head shots, indicating that they were indeed murdered by a professional. Could it be the work of Juba, the infamous “angel of death,” who is credited with more than 70 American casualties? Soon, a shot rings out and Matthews is hit. Isaac darts down from his safe position to help his buddy, but then he takes a bullet as well -- in his case, in his upper right leg. While Matthews lies helpless out in the open, Isaac scrambles over a short, crumbling stone wall for protection. Isaac is uncertain if the motionless Matthews is dead or alive, and when he radios for help he finds himself talking to the sniper instead of a medevac unit. The marksman, who calls Isaac by name and quotes Edgar Allan Poe, taunts him at first, but then says, “I want to get to know you.” Their deadly cat-and-mouse game is the focus of the rest of the movie.

Doug Liman (The Bourne Identity, Edge of Tomorrow) and rookie screenwriter Dwain Worrell do a great job of placing viewers directly in harm’s way and making us feel the intensity of Isaac’s predicament. Liman and cinematographer Roman Vasyanov shot on anamorphic 16mm film, which gives the movie a gritty, realistic edge, but it’s Taylor-Johnson who does the heavy lifting here. For well over an hour of the film’s slim 90-minute running time, the actor is the whole show. Yes, there is fine voice work from Laith Nakli as the unseen sniper, but it falls to Taylor-Johnson to sell the high-concept premise and make us sweat and fear right along with him, and he delivers big time. We feel his pain when he extracts a bullet from his leg, feel isolated and tormented as the smooth-talking assassin forces him to reveal things he’d rather keep hidden, and grow angry and anxious for Isaac to locate and kill the heartless bastard as his situation becomes more desperate by the hour.

The Wall isn’t perfect. Beyond the battlefield, we are given little insight into any of the characters, and it’s frustrating that Isaac is stuck behind the wall for the entirety of the movie and is never able to confront his enemy face-to-face. In addition, the film’s gut-punch finale comes off as contrived rather than convincing. Yet despite its flaws and its sharp but razor-thin premise, The Wall stands tall and delivers riveting -- albeit brief -- entertainment.

Beasts of No Nation—The AllMovie Review

Beasts of No Nation—The AllMovie Review