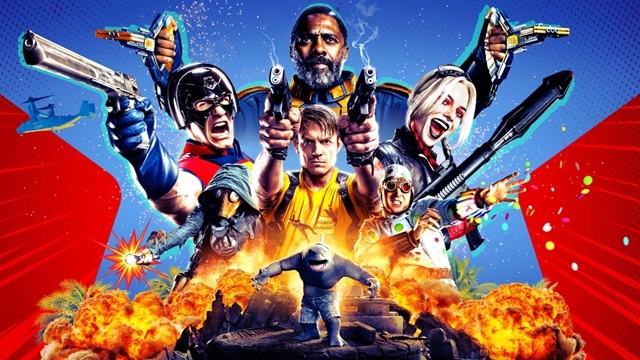 The Suicide Squad is back, this time lacking The Joker and helmed by writer/director James Gunn (Guardians of the Galaxy). What it lacks in a green-haired nemesis, it makes up for in solid, thoughtful storytelling and a cast that looks like they’re having as much fun as the audiences will.

Amanda Waller (Viola Davis) is once again assembling a team of criminals to go on a suicide mission, with the promise of ten years off their sentence if they are successful. This time she chooses Bloodsport (Idris Elba) to lead the team into Corto Maltese, which has recently had a coup of its US-friendly government. Their goal is to bring an end to Project Starfish, which would be devastating to American interests and the world in the wrong hands. As Bloodsport, Harley Quinn (Margot Robbie), Peacemaker (John Cena), and a team of second-rate DC villains start working their way towards Thinker (Peter Capaldi), things fall apart. This leaves the remaining team members to figure out how to achieve their goal with a diminished force and survive in the process.

Gunn has his work cut out for him to save the reputation of the popular DC comic. Though mildly flawed through a couple of inconsistencies, he manages to succeed through an entertaining script, careful selection of mostly B-grade (at best) villains, and a lot of “I did not see that coming” choices from the opening scenes forward. He builds tension from the beginning and then explodes it in gore and fire. From that moment forward, audiences experience a roller coaster tale that never slows down. Gunn’s direction of the actors was very specific from the leads down to the seemingly minor players, making nobodies somebodies, at least for a few minutes. One thing he must have asked of them was that they be over-the-top with the motivations of these characters. They all delivered – most notably John Cena’s Peacekeeper, although Daniela Melchior’s Ratcatcher 2 and David Dastmalchian’s Polka-Dot Man also stand out.

The cinematography is well done, rarely resorting to dizzying movement. The tight blending of live-action with CGI keeps the viewer in the frame. Best of all, Gunn uses his exceptional skills of choosing music that fits the action throughout the film, with both classics and new songs driving the pace wonderfully.

The Suicide Squad is thankfully nowhere near the film the 2016 entry was. And even though a couple of minor story elements don’t mesh with some of the characters’ personalities, these are easily overlooked in this film that, more than many other attempts, feels like a comic book brought to life. Gunn, his crew, and his cast have saved the life of a much-loved comic book from the shadow of a much-maligned film.