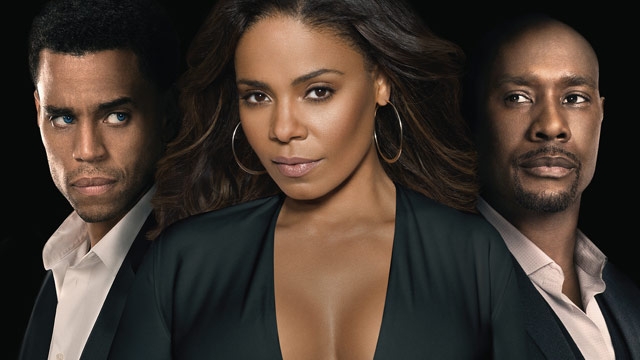 Leah (Sanaa Lathan) has it all: looks, brains, a beautiful modernist home in Los Angeles, a position of importance at a political-consulting firm, and the affections of her handsome boyfriend Dave (Morris Chestnut). But while her life seems perfect on the outside, her relationship has some sadly predictable shortcomings: She wants marriage and kids, and he doesn’t. After one too many arguments on this topic, she tearfully breaks up with him; she then embarks on a long period of workaholic mourning, which only ends when a drunken boor corners her at a bar and asks to have a drink with her. No, he’s not her new paramour — that would be the astute and handsome Carter (Michael Ealy), who comes to her rescue by posing as her boyfriend and telling the creep to take a hike. Grateful, she accepts Carter’s offer of dinner.

Leah is smitten by Carter’s manners and snake-charmer blue eyes, and before long she’s taking him to meet her parents (L. Scott Caldwell and the always welcome Charles S. Dutton). It seems like everything she’s ever dreamed of is coming true — until Carter beats a man into a bloody pulp for the crime of talking to her. Shaken, she breaks it off with him, only to find that he won’t take no for an answer: He soon begins a campaign of harassment, spying, and general creepiness that has Leah fearing for her life. As a result, she seeks an ally in a police detective named Hansen (the also always welcome Holt McCallany).

The Perfect Guy isn’t exploring new territory in the “psycho stalker” subgenre (although it’s notably more sensual than most films in this category). While the cast are capable and there are several moments of nail-biting tension, the plot leans too heavily on obvious clichés like the crazy collage of photos in the villain’s lair signifying his unhinged mental state, victims standing dumbfounded as the bad guy advances when they should be scrambling for their phone, and the laziest trope of all in American cinema: A Gun Will Solve This.

But the end result is elevated by the stylish direction of David M. Rosenthal, who gives this Lifetime-movie material a higher gloss than it usually receives. The film wouldn’t work if audiences didn’t believe that Leah’s passion for Carter was the real deal, and Rosenthal makes their animal attraction tangible in a scene in which they dance at an underground reggae venue, grinding against each other until they — and the audience — are at a fever pitch. Moody shots of the golden haze hovering over Los Angeles in the morning might not be strictly necessary in a plot-driven feature like this, but when Rosenthal juxtaposes them with hungry coyotes roaming the canyon streets, he reminds us that there are all kinds of unscrupulous animals on the loose in L.A. The Perfect Guy might be high melodrama, and its conclusion isn’t as pleasingly airtight as the ending in a thriller needs to be. Yet despite its faults, it dresses nicely, wears good cologne, and has excellent table manners.