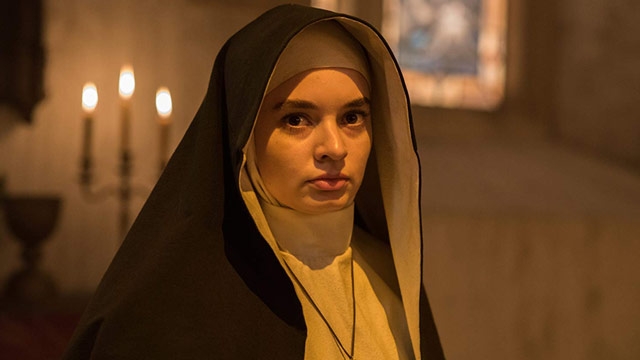 The Nun is a thoroughly creepy walk through the forest of The Conjuring Universe that’s highlighted by creative directing, solid acting, and thoughtful writing.

Valak (Bonnie Aarons), the demonic nun introduced in the Conjuring 2, resurfaces in a secluded Romanian monastery that was badly damaged during World War II. An eerie tone, similar to the other films in The Conjuring franchise, is immediately established as the setting is dominated by a cold, foggy presence, with the building itself resembling an old, medieval-esque castle. This mood is cemented by a three-word phrase visible on the inner-chamber door: “God Ends Here.”

We learn that a young nun has committed suicide by hanging, doing so in front of the monastery to add yet another haunting layer to the scenery. As a result, the Vatican enlists Father Burke (Demain Bichir) to investigate, with help from a young, more liberal nun in Sister Irene (Taissa Farmiga). Their efforts eventually bring them inside the monastery itself, where they encounter a ghostly being who tells them they must spend the night in a convent nearby, and this sets off an endless train of demonic experiences that take both characters on a roller coaster of terror.

Taissa Farmiga shines in her role as Sister Irene, and her experience in the horror genre -- she rose to prominence in FX’s American Horror Story anthology -- certainly helps elevate her performance. Bichir also excels in his role as Father Burke, and he does a nice job of appearing genuinely terrified of the demonic entities without being over-the-top, a balance that can be difficult to attain in the horror genre. Perhaps the most interesting character in the film is Frenchie, who is discovers the aforementioned suicide, played by Jonas Bioquet. Specifically, Frenchie tries to bring about several humorous moments, or ones at least intended to be humorous, though a proper reaction (i.e. laughter) is absent. Granted, this is likely the result of the circumstances of the plot rather than Bioquet’s delivery.

Director Corin Hardy and writer by Gary Dauberman deliver a well-crafted film that includes plenty of thrilling and suspenseful moments. However, one weak area may be in the film’s horror aspects. Yes, there are moments of fright, but the film feels more like a mystery/thriller than the horror we’ve grown accustomed to in The Conjuring universe. With that said, they’re still able to guide you through the film’s subject matter affectively. The music from Abel Korzeniowski also adds a nice touch.

The Nun is worth watching, even for its premise alone, and the conflict between the protagonist -- Sister Irene -- and the evil antagonist – Valak – is an intriguing struggle to behold. The ultimate juxtaposition of the characters, and the circumstances in which they find themselves, helps create a genuinely haunting ride.