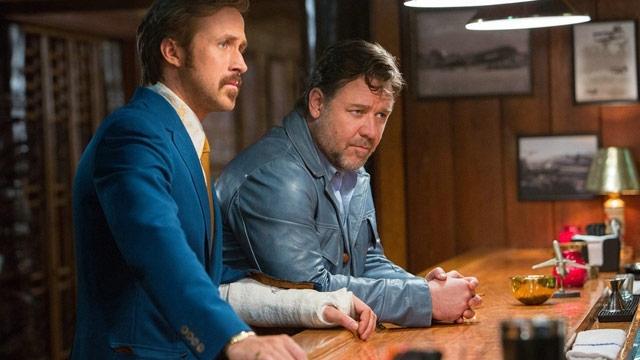 “You’re the world’s worst detective,” 13-year-old Holly March (a scene-stealing Angourie Rice) tells her sweet-natured but bumbling private-eye dad Holland March (Ryan Gosling) during a quirky and seemingly dead-end investigation in The Nice Guys, director Shane Black’s uproariously entertaining slapstick riff on ’70s pulp fiction. She’s probably right, but she fails to mention that he’s also one of the funniest. The mismatched pair of March and thug-for-hire Jackson Healy (Russell Crowe) are the best buddy duo since Mel Gibson and Danny Glover traded barbs while blasting their way through Los Angeles in Lethal Weapon, which served as Black’s Hollywood breakthrough nearly 30 years ago.

The unlikely pair meet un-cute when Healy shows up at March’s front door in a middle-class L.A. neighborhood, circa 1977, and breaks his arm to get him to quit a case. But before you can say, “let’s boogie,” the two are working together to find a missing young woman named Amelia (Margaret Qualley)—the daughter of a Department of Justice bigwig (Kim Basinger)—who appeared in her boyfriend’s porno flick. It seems everyone associated with the movie is being bumped off as a creepy hitman named John Boy (Matt Bomer) trawls the City of Angels to find the film (apparently, it contains more than just naked bodies). Soon, the tart one-liners are flying alongside the fists and bullets, as our polyester-wearing heroes pummel and shoot their way through Southern California’s disco-obsessed and smog-encrusted underbelly to find Amelia and her suddenly hot bit of celluloid.

Black, the Iron Man 3 helmer and one-time Tinseltown wunderkind who famously sold his spec script for 1996’s The Long Kiss Goodnight for four million dollars (and then quickly fell out of favor when the movie tanked), is well-versed in pulp noir. He presents L.A. as an updated Sodom and Gomorrah where prostitution, pornography, and mobsters thrive, but thankfully, he never allows these elements to smother the story or the comedy; instead, they provide a rich backdrop for the silly but increasingly violent shenanigans that take place. The Nice Guys’ smartly provocative script, co-written by Black and Anthony Bagarozzi, is filled with inventive gags that allow Crowe and Gosling to shine, as both men prove themselves to be gifted physical comedians. Crowe reportedly packed on 50 extra pounds for the role (he looks like a schlubby, low-rent bouncer), and he plays Healy as, yes, a nice guy, but one who isn’t averse to giving a dirtbag a good-old-fashioned beatdown if the price is right.

But it’s Gosling who’s the real revelation here. In one scene, March tumbles from a balcony during a Hollywood Hills bash and lands next to a freshly murdered corpse. The moment encourages Gosling to channel his inner Lou Costello (of the famed Abbott and Costello comedies of the 1940s and ’50s): He’s so frightened that he’s unable to move or speak, and resorts to gasping, facial tics, and hilarious gestures to communicate his dilemma. It’s a spot-on impersonation, and is only one of many inspired moments in a film carefully crafted to induce belly laughs.

At another point during the topsy-turvy case, Healy mutters, “One thing we know for sure: something funny’s going on.” You can say that again.