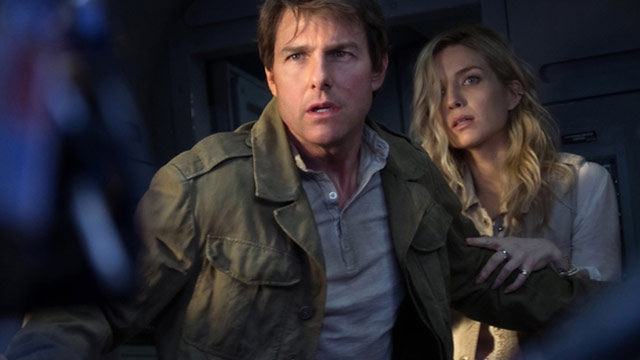 Universal unveils its Dark Universe series—a shared cinematic universe that plans to eventually feature films with such classic monsters as Dracula, the Wolf Man, Bride of Frankenstein, the Invisible Man, and the Creature from the Black Lagoon—with this adventurous but muddled mummy movie that Tom Cruise hopes to turn into another one of his lucrative franchises, like Mission: Impossible or the Jack Reacher flicks. Good luck, Tom: You’ll need it.

Cruise stars as Nick Morton, a modern-day tomb raider who plunders ancient sites for priceless artifacts he can sell on the black market. Along with sidekick Chris Vail (Jake Johnson) and archaeologist Jenny Halsey (Annabelle Wallis), he stumbles upon a sarcophagus buried in war-torn Iraq. Inside is the body of Ahmanet (Sofia Boutella), an Egyptian princess who was on the verge of becoming the first female pharaoh. But then her daddy went and had a son with his new wife, which royally ticked her off. What to do? Make a pact with the evil god Set and unleash “darkness itself,” then murder dad, stepmom, and baby brother, of course. Unfortunately, poor Ahmanet was buried alive just before she was able to kill her lover with a dagger encrusted with a magical stone, which would have enabled Set to inhabit the poor sap’s body. Since Morton found her, Ahmanet chooses him to be Set’s new host. But first she’ll have to locate the stone and the weapon, which were hidden separately centuries ago.

In England, Dr. Henry Jekyll (Russell Crowe)—yes, that Dr. Jekyll—runs something called the Prodigium, a secret organization that seeks to examine and destroy all evil. Ahmanet would be a prize catch to slice open and study, so he sends his tranquilizer-toting emissaries to round her up and bring her to his laboratory. From there, all hell breaks loose, as director Alex Kurtzman and his team of screenwriters try to decide whether they’re making an action-adventure thriller, a horror movie, or a comedy. Apparently unable to come to a consensus, they go with all three, with decidedly mixed results.

Cruise plays Morton as an all-brawn, no-brains goof, a guy who’s likable enough but hardly a character you’d build an entire franchise around. Crowe, normally a commanding presence, is here merely a sideshow. His appearances as Jekyll—and brief transformation into evil alter ego Edward Hyde—add nothing to the story and only serve as a distraction. Wallis fares better, but too often her role is reduced to a standard damsel in distress. Boutella, on the other hand, is well-cast and genuinely frightening. As for Johnson (spoiler alert!), he dies. But not really: No one important in this movie ever really dies, and he soon comes back as a comic-relief ghost who tries to give Morton the lowdown on Ahmanet. That might work if this were Abbott and Costello Meet the Mummy, but it isn’t.

The Mummy does boast a couple of genuinely exciting set pieces: There’s one aboard a doomed military plane that’s struck by a flock of nasty birds, and another in an underwater crypt swimming in zombies. But what the movie really needed was a coherent, believable story and characters we could invest in. When Ahmanet rises from her grave, she literally sucks the life out of anyone standing nearby to gain strength. Beware! Her dead-tired tale might just do the same to you.

The Lost City of Z

The Lost City of Z