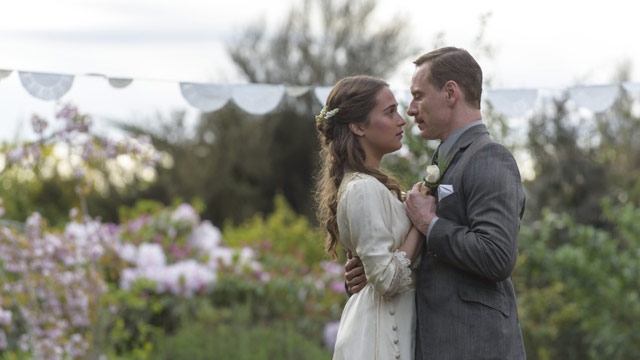 The Light Between Oceans

All of the pieces seemed to be in place for Oscar-hopeful period drama The Light Between Oceans: It has a winning cast; it tells an evocative story about love, loss, and motherhood; and it was helmed by talented writer/director Derek Cianfrance (Blue Valentine, The Place Beyond the Pines). But while this adaptation of M.L. Stedman’s 2012 best-seller is tremendously acted and technically proficient, it’s still a wholly unremarkable melodrama.

Australian Tom Sherbourne (Michael Fassbender) returns to his home country after serving in World War I, and accepts a solitary job as a lighthouse keeper on an isolated island off the western shore. In the coastal town nearest to the island, Tom meets Isabel Graysmark (Alicia Vikander), a young woman still reeling from the loss of her two brothers during the war. The two correspond while Tom remains secluded at the lighthouse, and eventually marry. Eager to start a family, Isabel moves to the island and conceives their first child while helping maintain the outpost. Tragedy strikes when Isabel miscarries, which threatens to forever change their idyllic paradise. The couple recover and manage to conceive again—only for the unthinkable to happen once more. As they sink into despair, a dinghy washes ashore containing a dead man and a crying baby.

Isabel convinces a reluctant Tom that they should raise the child, whom they name Lucy, as their own. Years later, the couple return to the coast for Lucy’s christening. There, Tom spots Hannah (Rachel Weisz) weeping at the headstone of her husband and infant daughter, who were lost at sea. Realizing that Lucy must be Hannah’s surviving daughter, Tom is conflicted as to how to proceed, while Isabel insists that they are Lucy’s real parents. Their perfect life, which was founded on an extraordinary lie, soon begins to unravel.

The proceedings are colored by the thick melancholy of the First World War, which not only foreshadows the couple’s future anguish, but also helps explain Tom’s reserved nature. What would have been called “battle fatigue” at the time drives him to seek isolation at the lighthouse, and eventually plays a large role in his guilt towards Hannah. At the same time, Tom’s courtship of Isabel and the couple’s nascent love affair are the most compelling and handsomely shot scenes in the film. Fassbender delivers occasional glimpses behind Tom’s stoicism, cutting through the stuffiness of this otherwise sparsely drawn character. And the radiant Vikander (proving her recent Oscar win was no fluke) breathes remarkable life into Isabel, which allows us to feel the full weight of her eventual mental crisis. It’s a beautiful opening half, filled with lush cinematography of the breathtaking coastline by Adam Arkapaw.

However, the central conflict ends up highlighting the shortcomings of Cianfrance’s picture. As the emotional toll for Tom, Isabel, Hannah, and a growing Lucy mounts, dewy-eyed moments are made to substitute for a nuanced examination of the characters’ dilemma. Isabel is overcome with grief, agony, and loss, and is soon reduced to a difficult-to-defend, one-dimensional mindset. Tom’s shame and guilt over his actions regarding Lucy are never fully connected to the tragedy he endured in combat, and the plot instead pivots toward a standard marriage drama. The story begins to feels like it exists in a vacuum, as the characters act rashly and the historical era it’s set in feels increasingly irrelevant. Perhaps asking questions based on impossible “what would you do?” scenarios simply leads to unsatisfying answers.

The Light Between Oceans is an unfortunate step backwards for the typically audacious Cianfrance. He has proven himself to be adept at marrying moral dilemmas with gripping drama, but the movie falls flat as it tries to weave together the various emotional strands of a difficult-to-adapt novel, and its depictions of searing guilt amount to little more than tight close-ups of teary-eyed actors. The script fails to inventively explore the ethical quandaries of the three leads, and despite some moments of truly affecting emotion, The Light Between Oceans feels too familiar to really transcend its nature as a shameless tearjerker. In the end, it settles for the safety of maudlin, made-for-cable territory.