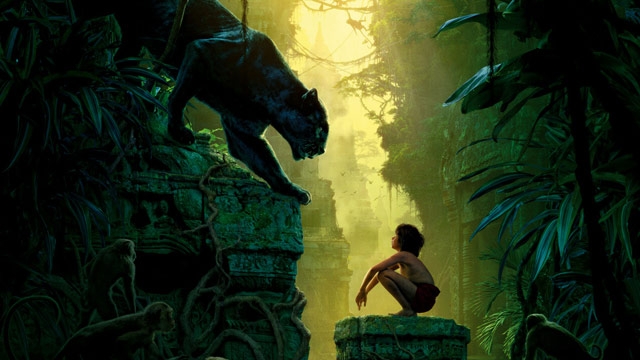 Jon Favreau’s ambitious retelling of the beloved 1967 Disney animated film The Jungle Book could have been a success based solely on the sum of its parts; the star wattage of its voice actors alone rivals the cast of any other popcorn flick hitting theatres this year. In order to truly do justice to its predecessors, however, the reboot needed to have enough heart to match its visually stunning CGI animals and backdrop. Fortunately, this incarnation is able to capture the spirit of the source material (which originates in Rudyard Kipling’s 1894 collection of stories of the same name), paying appropriate reverence to past versions while also creating its own unique wrinkles, humor, and overall journey.

We first find Mowgli (played here by newcomer Neel Sethi) struggling to fit in while living among a wolf pack, despite the diligent tutelage of his mentor and guardian, the panther Bagheera (voiced by Ben Kingsley). After direct threats from human-hating tiger Shere Khan (Idris Elba, whose vocal work is both enthralling and chilling), the boy’s adoptive wolf parents Raksha (Lupita Nyong’o) and Akela (Giancarlo Esposito) are forced to let Bagheera escort their son to the “man village” for his own safety. But Mowgli is separated from the panther during his reluctant trip to the human refuge, and a hypnotizing encounter with the transfixing snake Kaa (Scarlett Johansson) ends with the boy being rescued at the last possible moment by an affable, lazy bear known as Baloo (Bill Murray, providing terrific comic relief). Bagheera and Baloo, uneasy acquaintances who are quickly forced to become an odd couple of sorts, help Mowgli escape the grasp of orangutan King Louie (Christopher Walken), who wishes to harness the power of fire. Later, their journey culminates in a final battle with Shere Khan.

Favreau and the rest of the creative team behind this remake (especially screenwriter Justin Marks) are to be commended for crafting a well-thought-out plot that draws on prior adaptations of the story. Their choice to spend a substantial amount of time with the wolf family who raised Mowgli pays great dividends, as Nyong’o’s performance offers an emotional heft that adds undeniable gravitas to the picture. This incarnation also reprises most of the 1967 film’s classic tunes: Murray professes his appreciation for the “Bear Necessities,” and Walken does a rendition of “I Wan’na Be Like You” that remains an earworm while shedding most of the original version’s uncomfortable racial overtones. Favreau is not afraid to go his own way here, particularly with a showdown that varies greatly from the animated version, and which leads to a fresh, distinctive coda for a new generation of viewers.

Of course, there are certain aspects of the classic Disney film that are downplayed in this remake. Kaa’s role has been greatly diminished, and her accompanying musical number, “Trust in Me,” isn’t heard until the credits. Also, it’s slightly disappointing that there are no Beatles-inspired vultures here who break out into a mellow, groovy tune (a number that many modern artists probably would have been eager to recreate). And the 3D gimmick of the film’s theatrical release, almost compulsory for children’s entertainment these days, feels unnecessary in this instance, as the finely tuned CGI work and colorful settings are immersive enough on their own. If anything, the 3D makes the movie seem too busy at times.

These minor qualms don’t diminish The Jungle Book’s charm, though, as Favreau has not only created a wondrous world here, but crafted a heartwarming story about responsibility, loss, and the importance of utilizing one’s own gifts and talents. Both neophytes and fans of the 1967 movie can enjoy this adorable yet weighty tale, which captures the spirit of the Disney canon as well as any of the studio’s recent releases. Although it’s a remake, this Jungle Book hits the mark by just being itself.