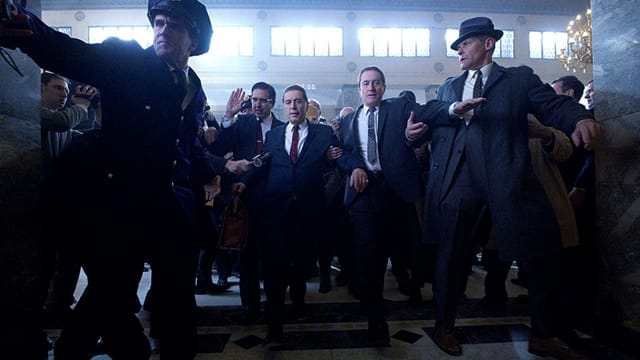 Martin Scorsese's long-gestating, decades-spanning crime saga The Irishman serves simultaneously as a comeback and something of a farewell to its top-line talent. As a meta-wrinkle, the film's arrival on Netflix also feels like something of a requiem for the movie ecosystem of the past, when a new Scorsese picture would result in long lines and a communal public experience. The latter sort of hand-wringing all takes place off-screen, as Scorsese's fascination with the criminal underworld and its ethics is coupled with thoughtful meditations on aging and mortality, resulting in a film that feels like a culmination rather than just another entry.

"The Irishman" is Frank Sheeran (Robert De Niro), a veteran who comes home to an America still reeling from World War II. As the narrator of his own story, we are left to take him at his word about the events that unfold, but also given reason to question his perspective. Sheeran pulls himself through hard times delivering meat, fortuitously to some powerful figures operating outside the law. They back him up when he’s accused of theft, and appreciate that he doesn’t rat out any of his clients.

Mob boss Russell Bufalino (Joe Pesci) takes Frank under his wing and sees the value of having a man who is capable of violence and staying quiet. The Bufalino family takes care of their people and provides plenty of opportunities for Frank to prove his loyalty. Frank also carves out enough space in his life to start a family of his own, and has to constantly massage the balance between the two.

Union leader Jimmy Hoffa (Al Pacino) becomes friends with the Bufalino family, and Frank in particular. Through Hoffa’s mafia ties, his rise to fame draws him into sharp conflict with other union leaders, and Hoffa finds that his power grows in tandem with his conflicts. He eventually hires Frank as his personal bodyguard, further complicating Frank's myriad allegiances.

Although Scorsese is clearly at the helm, one can't discount the value of the director utilizing his team of returning collaborators in areas like editing, cinematography, screenwriting, and music, which all adds up to a movie that's definitively Scorsese from top to bottom, making it manna for his devotees.

The Irishman plays like the highlight reel of an older man who has plenty of stories to tell and has conducted enough self-reflection to put everything into his idea of proper context. Despite fears of the film's much-hyped digital "de-aging" technique distracting from the performances, or jitters about its three-and-a-half-hour run time, The Irishman delivers on its sky-high expectations.