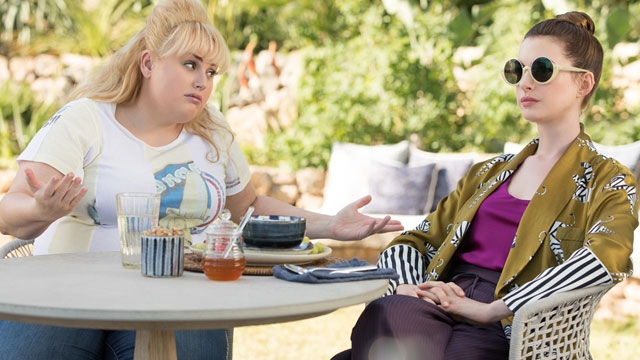 In what starts out as a promising take on the tried-and-true con artist genre, The Hustle quickly becomes stale and repetitive. There is a funny movie in here somewhere, but it’s held back by cluttered writing and inconsistencies. Director Chris Addison’s first crack at the silver screen is full of both little wins and losses. As the film moves along at a brisk pace, there are genuine laughs and puzzling head-scratchers. Co-stars Anne Hathaway and Rebel Wilson play off each other unbelievably well, together generating many of the movie’s bigger laughs. The Hustle never takes itself too seriously and never hides an ulterior motive behind its comedic walls: it’s a run-of-the-mill comedy that does not try to be something else.

Penny (Wilson) and Josephine (Hathaway) are both con artists operating at very different levels of success. Penny, a small-time swindler who does most of her work to unsuspecting men, decides to take a trip to France. Josephine, a sophisticated and highbrow scammer who has made a rich living beguiling the wealthy, happens to live in France. After a coincidental meetup, Josephine decides to take Penny under her wing and teach her the art of being a world class con-woman.

Where the movie goes wrong is in its repetition. A minor plot twist halfway through the movie is not enough to totally rejuvenate it, and it would have been better to stick to the original path the film was headed. Most scenes involving Wilson end with a crude joke that are hit or miss, and Hathaway acts like a springboard for some of the film’s funniest moments. One of the film’s major flaws lies in its inconsistent writing. Some jokes are truly laugh-out-loud funny, while others are cringe-inducing. Although this may be the case for many comedies, it is very noticeable here, sometimes within 30 seconds of each other.

The Hustle will be embraced by those who want to just sit back and have a few laughs, but nothing more. Although not ground-breaking by any means, Addison’s directorial debut shows promise for his future; he focuses on his stars above all else. Hindered by some questionable writing and storytelling, The Hustle is full of unrealized potential. However, it may satisfy movie-goers resolute on seeing a passable comedy.

The OId Man & the Gun

The OId Man & the Gun