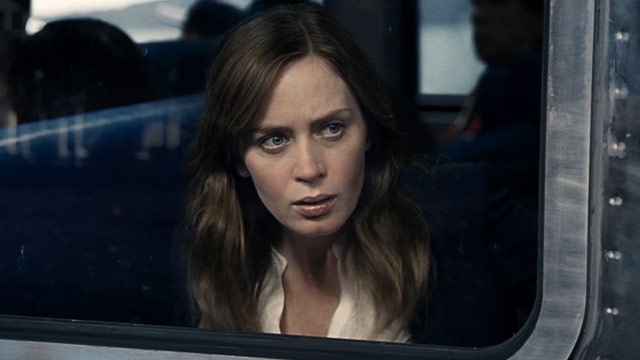 The Girl on the Train

Based on its whodunit subject material and the success of its literary source, The Girl on the Train has garnered more than a few comparisons to the David Fincher-directed Gone Girl. In this cinematic adaptation of Paula Hawkins’ novel, director Tate Taylor (The Help) is able to craft a similarly dark, enigmatic milieu, with a titular character whose unstable nature, and inability to let go of the past, causes her to float squarely into the orbit of a missing-persons investigation. The woman who goes missing is the flighty, damaged Megan Hipwell (Haley Bennett), but alcoholic Rachel Watson (Emily Blunt), who has become increasingly erratic in the wake of her divorce, does not know Megan by name. Instead, Rachel gets glimpses of Megan’s home life every day during her train commute, as she passes by the house Megan shares with her husband. Rachel grows obsessed with her seemingly idyllic, fulfilled existence, and gets furious one morning when she sees the woman embracing a man who is not her spouse. Drunk and angry that night, she storms toward a figure on the street whom she believes is Megan, and winds up falling down (or is she hit?); she then wakes up the next morning a bloody and disoriented mess, and discovers she’s a person of interest in Megan’s disappearance.

Of course, nothing is that simple. Most of the film is sufficiently suspenseful, as we ponder all of the possible scenarios and motivations. How abusive was Scott towards Megan? Why does Rachel want to get involved with this couple’s problems, and is her turbulent behavior hiding a sinister mind-set? But The Girl on the Train is less about trying to find the culprit, and more about revealing that people (and events) are vastly different, and much more complex, than how they’re viewed from an outsider’s perspective. By trying to find our way into the minds of all of the parties involved, Hawkins’ suburban-thriller novel (which Erin Cressida Wilson adapted for the screen) reminds us how far away from the truth we usually are.

Possibly because it’s can’t match the methodical, measured way the plot unspools in the book, the film version is not quite able to attain the same sense of start-to-finish intrigue. The spine-chilling realization that Hawkins’ story leads to doesn’t get enough setup onscreen to elicit a similar reaction from readers already familiar with the story. Thankfully, the bulk of the movie is bolstered by Blunt’s stellar turn, a raw and unsettling performance notable for its contrast to the strong, assured characters she is typically known for, and yet more proof that she is already one of the most elite actors in film today. Evans is a captivating wild card, and Ferguson elevates Anna beyond the shrill, housewife-with-secrets archetype that would bring down a lesser domestic drama.

The problem with The Girl on the Train isn’t the comparison to Gone Girl—it’s the shadow of the book itself. If the movie had managed to harness the disturbing introspection and revelatory bluntness at the heart of its plot, Taylor’s enigmatic teaser would stand as a top-notch work worthy of its source material. As it is, the inconsequential coldness that follows the film’s exciting climax will leave viewers only feeling numb.