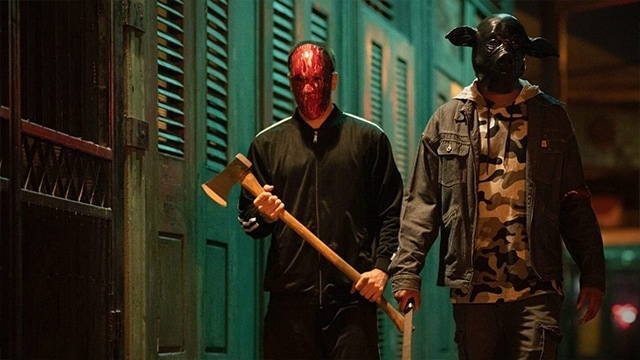 The Forever Purge is the fifth action/horror film in The Purge franchise. The New Founding Fathers of America are a group of people who have created a legal loophole called "The Purge," allowing everyone in the USA to commit any and all crimes without any repercussion for their actions, including actually killing people, for 12 hours, once per year. But a group of gun-toting maniacs in Texas decide that they might be able to get away with continuing The Purge endlessly, in order to take out their enemies and keep the country "pure."

Juan (Tenoch Huerta) and Adela (Ana de la Reguera) are immigrants who fled to a purge-abolished America to escape cartel violence back in their homeland. Juan works on the farm of wealthy owners Dylan Tucker (Josh Lucas), his wife (Cassidy Freeman), and his sister (Leven Rambin). They all seek shelter when The Purge is suddenly reinstated by a political party that favors The New Founding Fathers of America. After making it out alive, bunkering down safely for the 12-hour holiday of carnage, the group emerges to discover a horrible new reality.

A group of "Forever Purgers" who want to keep The Purge tradition alive and well, hatch a plot to never stop purging. In other words, they intend to push a completely lawless society and wipe out the rich and people of color. They’re going to weed out anyone they consider to not be a true American by killing them. But the small group of immigrants and ranchers are not going to sit idly by while the murderous Purgers come for them. Doing what they must to survive, they take the battle right back to the hatemongers as they flee to Mexico, which has opened up its borders to Americans, for a limited amount of time. But the little rag tag group has its own issues, including Dylan’s flagrant bigotry and jealousy of Juan’s horse-wrangling skills.

Directed by Everardo Gout (Days of Grace) there's plenty of emotion in The Forever Purge, even if most of it is rage. The cast is led through their one-liners, and they all play it seriously enough, despite the over-the-top premise. The non-stop action is reminiscent of a Wild West version of Mad Max, with most of the horror elements in the costuming and murders themselves. Despite the frenetic pacing, an uneven tone makes it hard to tell what genre this film belongs to, as it draws on elements of horror, action, thriller and more. James DeMonaco (The Purge series) writes the script and recaptures the brutality of the franchise, pushing it even further. In this latest installment, he ups the high-concept idea from what people would do in a 12-hour window of no rules, to the absolute limit that people could go to if there were no longer any rules, forever. The political allusion is unmistakable.

As sequels go, The Forever Purge manages to successfully ratchet the tension and mayhem up a few notches while continuing to add world-building intrigue to the premise. Disturbingly prescient, this gory horror flick is at heart a question of how far people would go if we had no rules in our society. There’s plenty of action and murder with a new back-country Texan spin on the setting, a far cry from the city bloodshed of the former films. The racial tensions feel genuine, while the ambiguous morality of the tale is drowned out in the bloodshed.