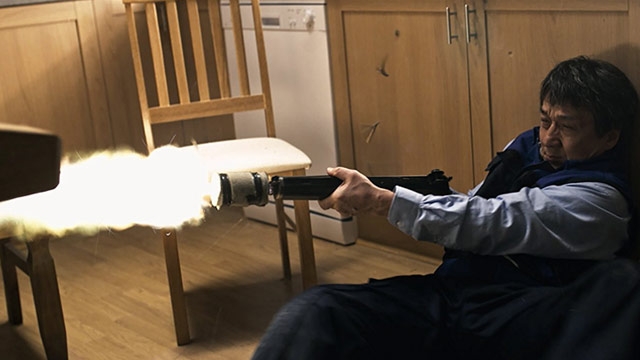 Jackie Chan gets a chance to show off his considerable acting chops, as well as his kick-ass martial-arts skills, in this engaging and vastly entertaining revenge thriller from veteran Bond director Martin Campbell (GoldenEye, Casino Royale). But Chan isn’t the only one who shines: A never-better Pierce Brosnan gives a fiery, passionate performance as a Northern Ireland political bigwig caught up in a deadly cat-and-mouse game in which no one can be trusted.

Quan Ngoc Minh (Chan), an immigrant restaurant owner in London, picks up his teenage daughter Fan (Katie Leung) from school and drives her to an upscale clothing store. She’s eager to buy a dress for an upcoming dance, but seconds after she enters the shop, a bomb explodes a few feet outside the store and she’s killed. The widowed Quan is devastated, and grows determined to find out the names of the terrorists involved in the blast and bring them to justice. A group calling itself the Authentic IRA claims responsibility, and Quan believes Liam Hennessy (Brosnan), a former IRA commander now working in more conventional politics, knows who the culprits are. First, Quan badgers him with phone calls. When that doesn’t work, he shows up at Hennessy’s Belfast office and demands to be given the names of the terrorists. Hennessy claims he doesn’t know who they are, but reassures Quan that it’s his top priority to find out. From there, Quan, who served in Vietnam and has Special Forces training, relentlessly stalks Hennessy, making his life a living hell until he surrenders the names. But what he doesn’t realize is that the bombing is part of a deep-rooted government conspiracy, one that is quickly spiraling out of control.

The Foreigner isn’t your typical Jackie Chan flick. There’s no levity; it’s a straight-up dramatic role for Chan and he delivers big time. Yes, the legendary martial-arts maestro still gets to kick some serious butt and do some amazing stunt work, but he isn’t the whole show. Brosnan’s philandering and increasingly frenzied politico actually has more screen time, as the film plunges headlong into the story’s more conspiratorial aspects. Campbell, working from David Marconi’s keen-eyed adaptation of Stephen Leather’s novel The Chinaman, skillfully ratchets up the tension as Hennessy’s world falls apart around him, partly due to Quan’s menacing harassment and partly due to his own dark past.

The Foreigner culminates in a great action set piece in a London apartment in which Quan, using whatever devices are at hand, takes his bloody revenge. It involves some terrific stunt work choregraphed by Chan, and it proves that the 63-year-old icon, who received a well-deserved honorary Academy Award in 2016, is still at the top of his game and will continue to be a giant cinematic force for years to come.