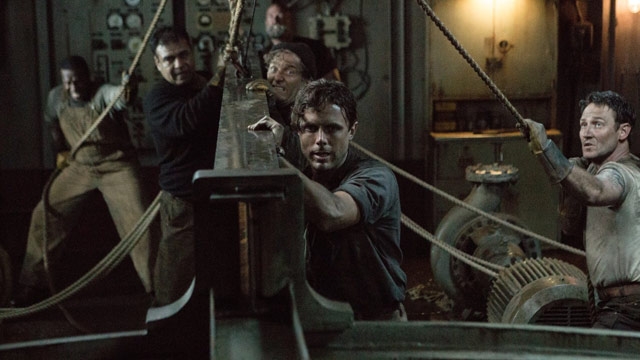 The Finest Hours, based on the daring 1952 Coast Guard rescue of the sinking SS Pendleton oil tanker during a treacherous nor’easter, should be a harrowing, edge-of-your-seat maritime thriller. All of the ingredients are there: a split-in-half ship with 33 panic-stricken men aboard who are desperately trying to keep it afloat; massive, 60-foot waves; hurricane-force winds; frigid temperatures; and a suicidal rescue mission led by an insecure coxswain, who pilots an ill-equipped, 36-foot wooden boat into the heart of a death-rattling storm with three untested seamen and no compass. Exciting stuff, right? Unfortunately, in the hands of director Craig Gillespie (Million Dollar Arm) and his trio of screenwriters (Scott Silver, Paul Tamasy, Eric Johnson), this remarkable true story never gets its bearings and is instead content to drift along when it should go full throttle.

The story veers off course from the get-go with a clumsy, overlong introductory scene in which Bernie Webber (Chris Pine), a shy, taciturn Coast Guardsman stationed in Cape Cod, tries to screw up enough courage to go on a blind date. Webber is a damaged soul — or so we’re told. He recently went on a rescue mission that quickly went south and resulted in tragedy. However, all we hear about this disaster is the simplest of details. Was the death involved Bernie’s fault? Could it have been prevented? We’re left to guess. Even worse, Webber is dull as a gray sky and barely registers a pulse. He never comes fully alive, even when he leads his volunteer crew on their triumphant mission.

The most interesting aspect of the story takes place aboard the imperiled Pendleton, where stoic first assistant engineer Ray Sybert (Casey Affleck) tries to keep the broken ship together with some ingenious jury-rigging, and later attempts to run it aground to keep the near-flooded vessel from sinking. The movie does manage to create some suspense by cutting back and forth between Webber and Sybert as they go about their tasks, but the problem is that the men are too similar: Both are soft-spoken introverts who reluctantly take action only after being forced to do so. Fortunately, the picture also has Holliday Grainger as Webber’s feisty fiancée Miriam. She provides the story with some much needed emotion, especially in a heartrending scene in which she confronts Webber’s commanding officer (Eric Bana) and pleads with him to call off the mission and bring her man home. When she’s onscreen the movie flickers to life, which is what is supposed to happen during the film’s climatic rescue but never does. Why? Listless editing, an all-too-predictable resolution, and bland characters we aren’t invested in.

On a technical level, The Finest Hours is top-notch. The raging storm, the split ship, and the massive rolling waves have all been crafted with the utmost care, and are impressive to watch (especially in 3D). Pity the filmmakers didn’t spend the same amount of effort developing three-dimensional characters, which could have resulted in a captivating high-seas adventure worthy of the brave men who lived it.