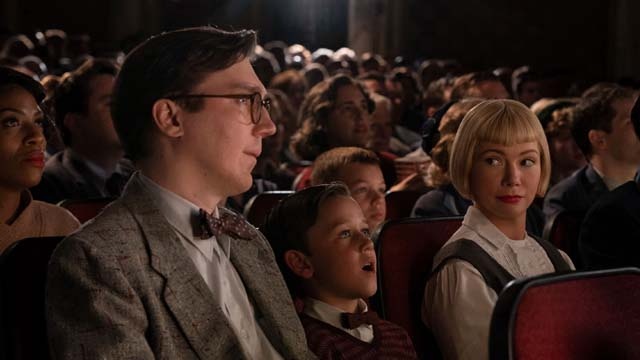 Every hero has an origin story and in The Fabelmans, the audience gets to watch Steven Spielberg, arguably a hero of American cinema, share his own. In this semi-autobiographical story written by the incredible Tony Kushner (West Side Story), we experience Spielberg’s coming-of-age story in the suburbs during the mid-20th century. Steven – Sammy in the movie – is taken to see The Greatest Show on Earth, and his imagination is ignited. The passionate realization that creativity burns within him comes to life as he watches the film, and that moment informs him of his entire future. He impresses his family, friends, neighbors, and even the Boy Scouts as he creates home movies on an 8mm camera. His rudimentary films show real promise, and his self-sacrificing mother and entire family understand that he is a real prodigy with true gifts that must be shared.

Like a young Spielberg, his creative team is gifted as he teams with a collection of longtime collaborators, notably a captivating score by John Williams (Indiana Jones and the Last Crusade). This is their 29th film together. Cinematographer Janusz Kamiński (Schindler’s List) visually transports the audience to suburbia, and there are a few nods to cinematic cinephiles at the end of the film. Cindy Tolan puts the pieces of the casting puzzle together and brings together an incredible troupe of actors.

Michelle Williams (Manchester by the Sea) is consistently superb, and she does the job as Mitzi, Sammy Fabelman’s mother who has given up her dreams of being a concert pianist to care for her children. It’s a meaty role, and Michelle takes the character on a journey from solitude to desolation to perhaps an Oscar nomination. Gabriel LaBelle (American Gigolo) as Sammy is in awe of each cinematic experience, and the audience can see the young filmmaker’s heart through his eyes. Sammy’s dad, Burt, is played by Paul Dano (The Batman), and his portrayal of the engineer who would go on to help create the first personal computer is a standout. Rounding out the main cast is Burt’s best friend, Benny (Seth Rogan). Rogan brings such sensitivity and gravitas to the role, that it may be worth seeing the movie for his performance alone.

Because Spielberg treats the movie like precious cargo and doesn’t cut a word, it clocks in about two and a half hours. But it is cast well and shot beautifully, and maybe after 75 years of turning the spotlight on other people’s stories, it’s time for an audience to sit back and experience his own.