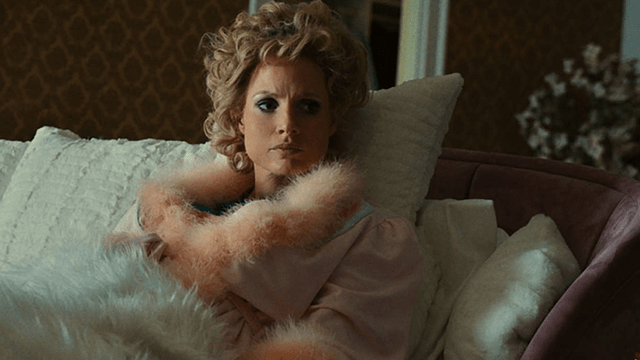 The Eyes of Tammy Faye

The Eyes of Tammy Faye is a biopic drama film based on the true-life rise, fall, and redemption of Tammy Faye, a country girl turned pop-star televangelist. When Tammy Faye runs off and marries evangelist Jim Bakker, her parents don’t approve. But the pair soon rises to superstar religious fame as they become some of the most well-known televangelists of all time. But their quick rise to fame comes with problems when they’re accused of fraud and the misuse of the funds they raise. Tammy Faye (Jessica Chastain) is a small-time country girl who leaves her very strict religious family when she falls for a man of God, Jim Bakker (Andrew Garfield). She marries him and they set off on a crusade to spread their new message of God’s love, a little more lenient and accepting of people than more conservative religions have traditionally allowed.

Jim Bakker introduces Tammy Faye Bakker to the world of television – where their message can be amplified and they can ask for more money to help their cause, so that they can help more people. Their pristine image quickly elevates them to become stars in their industry, hanging out with the likes of Jerry Falwell (Vincent D’Onofrio) where Tammy’s acceptance of homosexuality, AIDS and other progressive issues are frowned upon. But the real drama ensues when Tammy and Jim are accused of misusing the large sums of money that they’re raising on television. They do live an exceedingly rich life, although they both claim to want to use the money for spreading the word of God. Were Tammy Faye Bakker and Jim Bakker heroes made out to seem like villains? Or were they well-intentioned salt-of-the-earth folk who made some big mistakes on their path to help save the world?

Directed by Michael Showalter (The Big Sick, The Lovebirds) The Eyes of Tammy Faye is an ambitious work in that the story was already told well in the documentary upon which it is based. Rather than explore anything further or dramatize the film, Showalter leans heavily on work that’s already been created and adds in some extra humorous elements which do work most of the time. He also helps to bring out some fine performances that are a lot of fun to watch, although fairly hollow in its message overall, with the exception of the focus on Tammy Faye herself.

The novice writing by Abe Sylvia (television’s Dead to Me, Nurse Jackie) has faults in the structure and pacing of trying to tell decades of story in only two hours. Rather than focusing on what makes the characters human or the events important, history is crammed into a neat package that ends up a little too lacking to land any impact. Because Tammy Faye is historical figure, it’s easy enough to flesh out her character, but everyone else is left hollow and so she inhabits in an empty universe.

The Eyes of Tammy Faye has one major saving grace, and that’s Jessica Chastain’s incredibly strong acting turn as Tammy Faye Bakker. Half comedy, half dramatic rehash of the documentary film already created, this movie is half as strong as it needs to be to offer anything new, or interesting to a story that’s already been told, written about and discussed in depth. It’s like the film itself mirrors Tammy Faye in putting on too much makeup to account for a deep inner void.