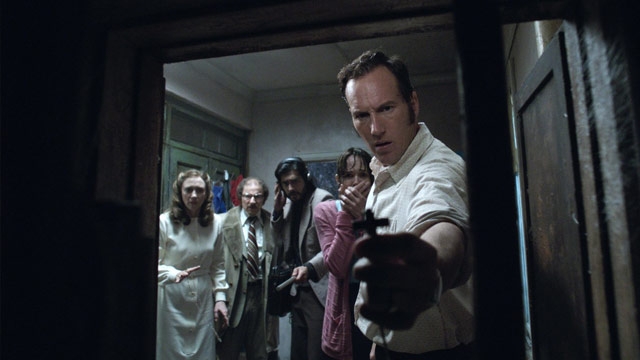 James Wan, director of 2004’s magnificent gorefest Saw and 2010’s Poltergeist homage Insidious, has returned with The Conjuring 2, the follow-up to his 2013 based-on-a-true-story chiller. The fantastic Vera Farmiga and Patrick Wilson (the latter a regular in Wan’s films) reprise their roles as real-life, paranormal-investigating power couple Ed and Lorraine Warren, who begin the movie in the thick of the case that catapulted them to fame in the late ’70s: New York’s infamous Amityville haunting.

During their investigation, Lorraine slips into the spirit world, which Wan depicts as a darkly ambient alternate dimension separated from our reality by a thin, easily penetrable veil. There, she encounters a nightmarish demon dressed in a nun’s habit, who shows her a gruesome vision of her husband’s death. In the wake of this horrifying prophecy and the media circus surrounding the case, Lorraine insists that the couple take a breather from accepting ghost-related work.

However, their retirement is brief. Across the pond in London, the Hodgson family (four children and their single mother) struggle to balance everyday stresses, like money woes and schoolyard bullies, with the added trouble of an aggressive and malevolent spirit in their house. Based on the allegedly true events of the “Enfield poltergeist,” the story finds 11-year-old Janet Hodgson (Madison Wolfe) and her sister Margaret (Lauren Esposito) drawing the supernatural force into their home with a seemingly innocuous, homemade Ouija board. Once unleashed, the spirit wreaks havoc on the family.

In addition to the mysteriously moving furniture and toys, disembodied voices, and loud bangs made famous by genre tropes, young Janet faces the brunt of the spirit’s wrath via possession: It uses her body to communicate with others in its deep voice, and uses its powers to cause her to sleepwalk and sleep-teleport during the night. Things come to a head when matriarch Peggy (Frances O’Connor) witnesses a dresser fly across the room, prompting her to immediately take her children to the neighbors’ house across the street. Police officers summoned to the home also witness several disturbances and, deeming the situation slightly above their pay grade, suggest that Peggy call the church for further assistance. Hoping that her story will reach someone who can help rid her family of the turmoil, she allows the local media to get involved.

The publicity around the incident makes its way back to the Warrens, who continue to be plagued by portentous visions of the demonic nun as they spend time with their daughter and attempt to remain retired from supernatural activities. Although Lorraine is hesitant to get involved due to the fear of losing her husband, the couple eventually agree to fly to London to investigate. Once there, mayhem ensues as the Warrens attempt to aid the desperate family in identifying and banishing the vengeful spirit, which turns out to be more taxing than they had initially anticipated.

This entertaining but wholly unoriginal film crescendos into an increasingly pulse-pounding drama, one that’s interwoven with a love story between the two ghost-hunting spouses. The chemistry between Wilson and Farmiga is undeniable, the jump-scares are plentiful, and the genuinely funny moments balance out the anxiety-inducing tension with surprising levity (also something to look forward to: Patrick Wilson singing Elvis). The creative camerawork and ingenious use of lighting harmonize with the movie’s ominous score to create the spine-tingling, nightmare-evoking goodness that the horror community has come to expect of Wan’s filmmaking. While a bit too long at two hours and 13 minutes, The Conjuring 2 delivers an entertaining experience for genre fans looking for a dose of predictably eerie, spectral horror. (And stay through the end-credits sequence if you want to see a skin-crawling slideshow of pictures taken at the real-life Hodgsons’ home during their ordeal.)