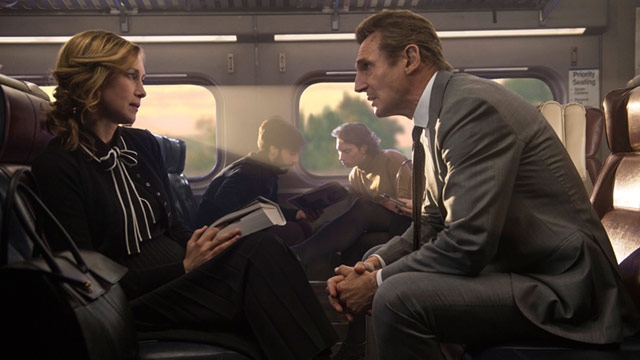 Michael MacCauley (Liam Neeson) is having a bad day. After ten years of faithful service as an insurance salesman, he’s being let go, and, just to rub it in, his severance package consists of a medical-benefits extension and exactly zero months of salary. He downs a few beers with his cop buddy, Alex Murphy (Patrick Wilson), on the way to the train station. You see, MacCauley used to be a cop, too. On the train ride home, an attractive, professional-type woman (Vera Farmiga) strikes up a conversation with MacCauley and things start to get weird. What if, she asks him, you just had to do one little thing that wouldn’t affect you at all, but would gravely affect someone else on the train -- and you would be paid 100,000 dollars for it? Are you the kind of person who would look away if you’re not directly involved in the ugly part of things?

The Commuter keeps the audience guessing for a while as to whether MacCauley is the look-away kind of person or not. It’s one of the more interesting dynamics in the movie, and one of the more legitimate. That legitimacy is important because The Commuter suffers from a fatal flaw that ruptures its foundation: Its central premise is completely and profoundly implausible. It requires a superhuman suspension of disbelief to think that the bad guys would go to the lengths they do to involve MacCauley in the assassination of a certain person. The question of “why don’t they just do this themselves?” will not stop running through a viewer’s mind, and it gives the whole enterprise an air of silliness.

Director Jaume Collet-Serra (The Shallows) has worked with Liam Neeson before on the films Unknown, Non-Stop, and Run All Night, so one would expect that they would be able to deliver something better than mediocre for their fourth collaboration. Alas, mediocrity abounds in The Commuter. The fight scenes are lazy and poorly shot. The moving-train antics are cliched and anticlimactic. And frankly, as much affection as one might have for Liam Neeson, he is starting to show a bit too much wear and tear to really do this action-movie thing right. If that means we see him in more roles like the one he played so well in Scorsese’s masterful Silence, then we’re all the better for it.

There are some moments of whodunit suspense in The Commuter, and one or two edge-of-your-seat action sequences. It’s also gratifying to see Vera Farmiga show her sociopathic side. And a couple of the twists and turns on the ride to answer the question that kicked off the whole plot are ingenious. But, even though it’s not without its charms, The Commuter is no Taken. And how high of a bar is that, really?