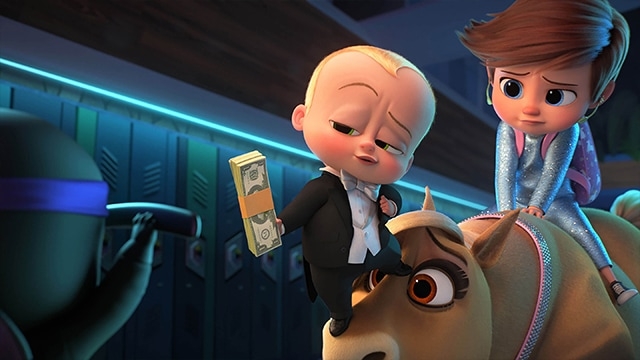 The Boss Baby: Family Business is the high-concept, low-brow sequel to The Boss Baby, loosely based on the picture books of the same name by Marla Frazee. When babies Tim and Ted grow up, they have wildly different lives – becoming a family man and a businessman, respectively. But when Tim’s little one, Tina, turns out to be a boss baby with a mission for which she needs her father and uncle’s help, they transform back into babies for 48 hours to help stop a nefarious plot to turn toddlers into brats. A now grown-up version of Tim Templeton (James Marsden) and former Boss Baby Ted Templeton (Alec Baldwin) have drifted apart. While Ted has expectedly become a hedge-fund CEO, Tim is now a stay-at-home dad for his two daughters, 7-year-old Tabitha (Ariana Greenblatt) who idolizes her "Boss" uncle Ted, and baby Tina (Amy Sedaris) who is becoming a Boss Baby of her own.

Little Bossy Baby Tina reveals that she has a mission for Tim and Ted: she needs them to take a secret formula that will turn them young again for only 48 hours. Disguised as kids, they can become undercover agents to get into Tabitha’s school and take down young Dr. Erwin Armstrong (Jeff Goldblum) who has opened a franchise of schools known as the Acorn Centers for Advanced Childhood; these are designed to turn his fellow toddlers into super-brats that will lead a revolution against parents. Ted and Tim take the opportunity to help Baby Corp once again, which also offers them an opportunity to re-bond their kinship after drifting apart. But now they have only two days to relearn how to be young, and without their adult capabilities, they team up with Tina to figure out how they can stop the villainous Dr. Armstrong and stop the bad baby uprising.

Directed by Tom McGrath (The Boss Baby, Madagascar) The Boss Baby: Family Business offers more action than even the first, along with more jokes, even if they’re not better. While Tobey Maguire is replaced by James Marsden as the adult Tim, the ensemble cast is very competently assembled and coached. In the unbelievable plot they inhabit, they all manage believable and occasionally tender moments.There is a sweet message buried somewhere under the sickly-sweet candy coating of The Boss Baby: Family Business, but that’s not the primary focus of the film. Childhood doesn’t last forever, but family does… and some movie franchises too. As a middleweight contender as far as sequels go, there are plenty of enjoyable moments scattered throughout, and it is in no way horrible, which is saying a lot for a sequel in this genre.

Forgettable fun is offered up throughout the action-packed and possibly overly long The Boss Baby: Family Business. Thoroughly crass and obnoxious, the jokes are rather appropriate for kids, and designed for them as well. Some of the laughs land and there’s a lot of cleverness in pushing the envelope quite far while remaining a family film. A talented voice cast rounds out a familiar plot that does its job as the film tries at every opportunity to entertain, and it mostly succeeds.