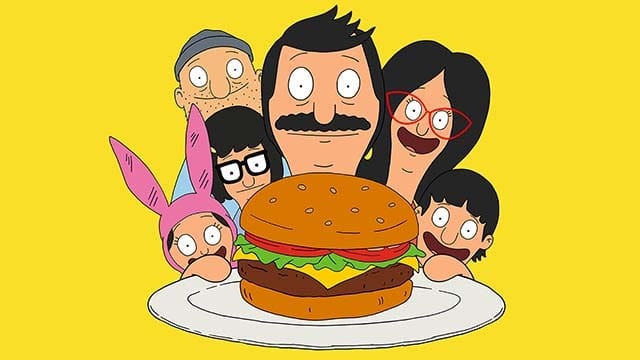 The Bob's Burgers Movie is directed by Loren Bouchard and Bernard Derriman, both of whom have won multiple Primetime Emmys for various episodes of the TV show. The voice actors from the show reprise their roles in the movie, H. Jon Benjamin as Bob, Kristen Schaal as Louise, Dan Mintz as Tina, John Roberts as Linda, Eugene Mirman as Gene, and Larry Murphy as Teddy. They are joined by the Fischoeder family voiced by David Wain, Zach Galifianakis, and Kevin Kline.

As in the TV series, the beloved Belcher family is struggling to keep their restaurant open. The events in the movie make that even more difficult when a giant sinkhole appears in front of their door, making it impossible for customers to come in. Bob, Linda, and their loyal friend Teddy come up with idea after idea to get their food to the people of their seaside community. Meanwhile, the kids have their own plans of how to save the family business.

The typical hijinks of the TV series are magnified on the screen in this equally hilarious movie. Feature film adaptations of TV series don’t always go off without a hitch. The Bob’s Burgers Movie is a shining example of how it can be done well. The animation and the sound quality are fantastic. The voice acting is great, and it is good to hear the original voice actors play their typical roles.

Like most animated feature films (especially ones based off TV series), this was a musical. If moviegoers aren’t big fans of singing in movies, don’t fret. The songs are few and don’t hinder the plot. They are used well and are just the right amount of quirky for fans and new viewers alike. The detail given to the dance numbers were apparent as each character had their own dance moves. It was organic and unique with no copy-and-paste arrangements.

The writing rose to cinematic heights. Not only were there complications with the business and sinkhole, but each of the Belcher children were dealing with their own troubles too. Will Tina be able to overcome her nerves and ask Jimmy Pesto to be her summer boyfriend? Will Gene be able to get his band, the Itty Bitty Ditty Committee, to headline at the big summer festival? Will Louise be able to prove to the popular kids that she’s not a baby? And will she be seen without her trademark pink rabbit ears? There are a surprising number of stakes in this 102-minute movie.

Viewers don’t have to watch the show to be able to understand what’s going on. However, fans of the TV series will want to rewatch the movie multiple times as there are a plethora of Easter eggs hidden in the background. The Bob’s Burgers Movie is a funny and light-hearted film filled with loony summer antics, farcical humor, and wonderful one-liners expertly delivered by the cast.