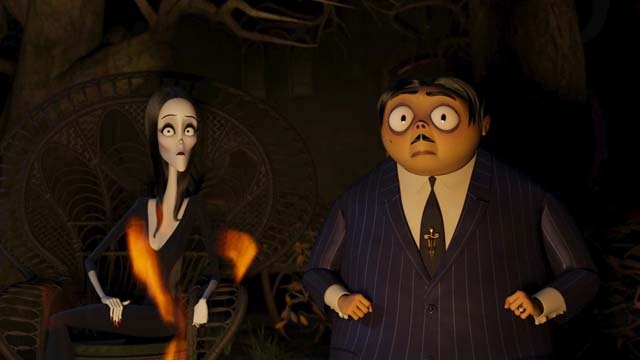 The spookiest and cookiest family is back at it again, and this time they are going on a family vacation. Co-directors Greg Tiernan and Conrad Vernon return for the sequel to 2019’s, The Addams Family, offering up a different twist for America’s favorite macabre relatives. Much of the cast also makes a return, as they contribute to a wonderful performance of their reprised roles. All the pieces are in place for a great film, but The Addams Family 2 seems to stall out somewhere in the middle. A combination of mediocre storytelling, and off-putting animation stop this spooky sequel from being great, but it is worth a watch for children and fans of the eccentric family.

The Addams Family are getting antsy in their newfound house and decide that a vacation is in order. As they plan to leave for a road trip across the country, Gomez (Oscar Isaac) and Morticia (Charlize Theron) are welcomed with some disturbing news: their daughter Wednesday (Cholë Grace Moretz) may have been swapped at the hospital on the day of her birth, and ultimately may not be an Addams. As the concerned parents suppress this information, they embark on a country-wide road trip, filled with the usual hijinks from Pugsley (Javon “Wanna” Walton) and Uncle Fester (Nick Kroll).

Although The Addams Family 2 is entertaining enough, full of truly funny quips and great characters, there still seems to be something lacking. The decision to take the setting away from the Addams Family Mansion may have seemed like the correct choice in order to procure a unique story, but this has the inevitable effect of leaving the house out of the film. The mansion is just as much of a character as the Addams family, and its absence really leaves a hole in the movie. When the setting does take place in the haunted home, the viewer is treated to many little details that wholly authenticate the scene. Without that, things start to look a little odd, especially when we see the Addams Family vacationing on a bright, sunny, Miami beach. Having said that, many kids watching will never even notice; they will be too enthralled by the consistent gags and pranks being highlighted on screen.

The odd setting is questionable, but it does open the door for an intriguing tale of Wednesday’s self-discovery. Growing up in this zany family has always been part of Wednesday’s identity, but when she catches wind that she might not be an Addams, her mind wanders, and she tries to find herself. Moretz does a fantastic job conveying the dry, morbid tone of her character, and the movie is better for it.

Fans of the classic TV show or the 1990’s films will enjoy the animated reboots, if only to bring them back into the universe once again. It would have been nice to keep the sequel grounded and close to home, but the family vacation does take us on a ride that we haven’t seen all that often. The bright colors and perky vacationers may contradict the very essence of The Addams Family, but in the end, it works well enough.