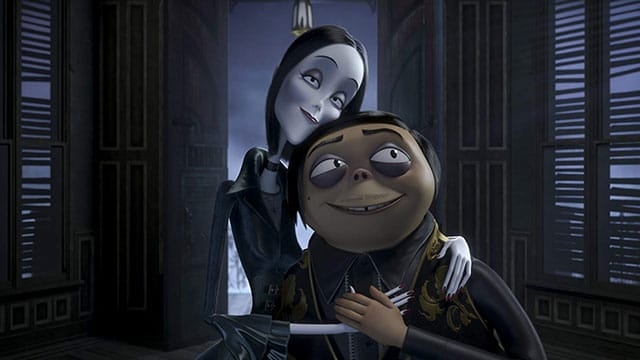 Directors Greg Tiernan and Conrad Vernon (Sausage Party) team up again, this time with a script by Matt Lieberman (The Christmas Chronicles) in an attempt to bring The Addams Family back from the dead. The film is enjoyable, even if there is little new to see as it proceeds predictably from beginning to moralistic end.

While fleeing an angry mob after their wedding, and seeking to live in peace, Gomez (Oscar Isaac) and Morticia (Charlize Theron) Addams decide that they need a change of location—where nobody knows them. Once there, they have thirteen years to themselves, during which time they settle down and have two children, Wednesday (Chloë Grace Moretz) and Pugsley (Finn Wolfhard). At the same moment Pugsley is set to become a true Addams through a ritual attended by the entire Addams clan, the cookie-cutter community below discovers the Addams’ home on the hill. The leader of this community, home improvement television star Margaux Needler (Allison Janney), determines that she must rid herself of them before their presence destroys her chances of selling the remaining homes in town and keeping her career alive.

The script, while entertaining, is as cookie-cutter as Needler’s town. There isn’t much unexpected or original material, and this is disappointing. It is almost as if Lieberman chose to try to find a middle ground between the original television series and the later films, all while making an over-obvious point. The result is standard fare with a few single-panel laughs. There are also some bright spots, though, including a little more development for Lurch (Vernon) and Pugsley than audiences are accustomed to.

Even with the bland script, the direction for the actors is skillful, making the entire cast live firmly within the established characters. Theron’s performance shines above the solid efforts of everyone as she plays the unemotional Morticia to comic perfection, once again demonstrating her versatility as an actress.

The animation is crisp and clean, and it is refreshing to see the characters look like the original cartoons, at long last. This adds a great deal to making the film better. Backgrounds stand out and are solid—the rural city is as cheerfully colorful as the Addams house is gloomy and dark.

The soundtrack adds nicely to the film as well, including an homage to the original theme. A mixture of old and new songs, including original music by Christina Aguilera and Snoop Dogg (who also voices It), flow into the action well.

Unfortunately, there is not enough creativity in The Addams Family to keep this fascinating franchise out of its tomb for much longer than a short graveyard shift. Still, the film is worth seeing, as long as viewers don’t expect too much originality.