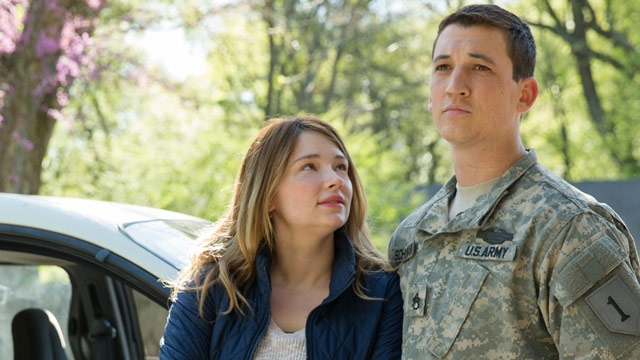 There are plenty of war movies that examine the paralyzing stress soldiers endure during combat. The stakes couldn't be clearer: Their lives and physical safety are in danger every ticking second in a war zone. But few films confront the hidden cost that they continue to pay after they've served their country. Soldiers and their families must deal with the aftermath of the life-altering effects of war, and it's this intricate drama that writer/director Jason Hall explores in Thank You for Your Service.

Based on David Finkel's 2013 non-fiction book, the movie follows a trio of U.S. veterans who struggle with post-traumatic stress disorder when they return to civilian life in 2008 after a combat tour in Iraq. Miles Teller plays Sergeant Adam Schumann, who comes back home to his wife Saskia (Haley Bennett), daughter, and newborn son. Tausolo Aeiti (Beulah Koale), a Samoan-American soldier, returns to his wife. And, in the movie's most intriguing story line, Hall shows Will Waller (Joe Cole) returning to an unexpectedly empty home and a partner who won't return his calls. The three soldiers try their best to readjust, and end up going out to a bar together. There, audiences catch a glimpse of the complete openness between them, expressed in rowdy horseplay. With the stage set, the plot proceeds in an orderly manner.

Perhaps the greatest feat that Hall pulls off is successfully portraying the destructive psychological effects of wartime violence. It's no small feat to transfer the high-wire tension of combat in an Iraqi war zone to the domestic lives of soldiers living in Topeka. These unseen wounds are as real and harmful as the bombs that Adam keeps looking for, even on the wooded roadside of the American Midwest.

This is achieved through fine acting from Miles Teller and Beulah Koale. With remarkable sensitivity and nuance, both lead actors give vulnerable performances that draw us into their characters' lives: The anger, frustration, and despair brought on by PTSD are fully present in their faces, bodies, and voices. In particular, a scene in which Tausolo has a violent breakdown is downright tense and all too real. Hall also judiciously forgoes the use of flashbacks to give audiences a taste of the soldiers' intrusive memories. Instead, he blends Adam and Tausolo's hallucinations of the deceased Sergeant Doster (Brad Beyer) into their everyday moments. The result is subtle, but effective—viewers get the sense that their guilt and distress are utterly pervasive and inescapable.

Thank You for Your Service is not only a well-written tale of the issues that veterans deal with when coming home. It goes beyond that and humanizes soldiers who cope with PTSD, which reaffirms their experiences while acknowledging the difficulties they face. The film broaches the topic with respect; as such, it honors these soldiers and the sacrifices they've made for their country.