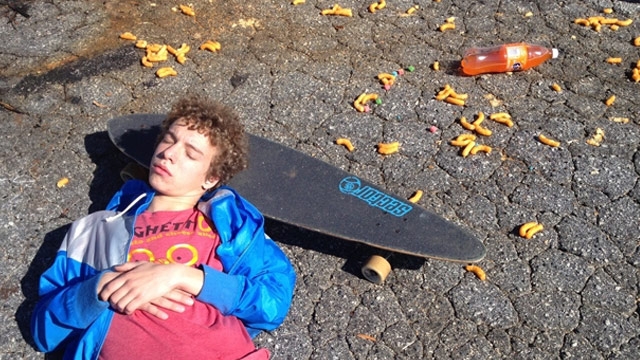 There’s an abandoned trailer park tucked behind a patch of woods somewhere in rural North Carolina, and one aimless afternoon four teenage friends decide to go explore its ruins. Blaine (Blaine Edward Pugh) snaps cell-phone photos of left-behind dolls and gaping doorways, while his pal Jacob (Jacob Kristian Ingle) kicks apart broken-down appliances. They’re neither creating nor destroying with these actions; they’re only trying to make sense of this netherworld-like place, just as snakes glean molecules of scent from the air by flicking their tongues. They sit on the cracked asphalt with Haley (Haley Ann McKnight) and Will (William Dickerson) and brew up a nauseating elixir of cheap soda and hard candy in an enormous container, daring each other to drink the frothing mess. They coast downhill on skateboards and doze in abandoned recliners, as the cacophony of an insect choir slowly crescendos around their afternoon.

These events fill the first 30 minutes of Sunset Edge, at which point the narrative switches focus to Malachi (Gilberto Padilla), a young man, only slightly older than the teens, with the soulful, lost face of an Aztec carving. Flashbacks depict his lonely childhood on a remote farmhouse with his wizened grandfather (Jack Horn), who warns him not to ask too many questions about his past. When his grandfather doesn’t wake up from a nap one day, Malachi is free to wander down to the trailer park he half-remembers in traumatic shreds.

Sunset Edge’s most glaring flaw is also its greatest strength: Namely, that nothing really happens and there is little at stake for any of the characters. But this resolutely lo-fi and hauntingly lovely movie somehow sidesteps the expectations of audiences hungry for big third-act payoffs, and ventures instead into the hypnagogic minimalist territory of other beautiful head-scratchers like Last Year at Marienbad or Picnic at Hanging Rock, in which an impenetrable yet magically charged location is really the main character. (Intriguingly, director Daniel Peddle also uses his characters’ desire to document their lives via cell-phone photos and videos as a way to create portals in time, as well as show how the past and present are intertwined in elegant, Celtic-knot narrative loops.) Sunset Edge has its shortcomings, but this Southern Gothic mumblecore meditation offers a rich experience for patient viewers who value moody beauty over tidy conclusions.