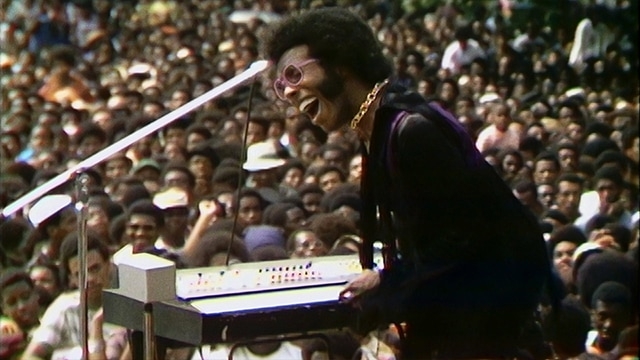 Summer of Soul (…Or, When the Revolution Could Not Be Televised)

Ahmir "Questlove" Thompson steps away from his Tonight Show gig to direct Summer of Soul (…Or, When the Revolution Could Not Be Televised), compiling footage from the third Harlem Cultural Festival that sat dormant for fifty years. In doing so, he has given audiences a palatable taste of several important and pivotal weeks in both American and Black history that preceded and were overshadowed by Woodstock.

"'69 was the year where the Negro died and Black was born." This poignant statement from Reverend Al Sharpton exemplifies the entire tone of the third Harlem Cultural Festival. The nation in general and the Black community in specific were still reeling from the assassinations of John F. Kennedy, Malcolm X, Martin Luther King Jr., and Robert Kennedy. Tony Lawrence, a New York nightclub singer, organized an event spanning several weeks in the summer of 1969 at Mount Morris Park, the Harlem Cultural Festival. His charm and drive booked top acts from all contemporary music genres, including B.B. King, Gladys Knight and the Pips, Nina Simone, Sly and the Family Stone, and Stevie Wonder. The festival was a celebration of both Harlem and Blackness that drew crowds of all ages. Sponsor Maxwell House had the shows filmed by Hal Tulchin. Despite a combined attendance of over 300,000 people, Tulchin couldn't find a market for the hours upon hours of footage. As a result, it sat dormant for over five decades.

Questlove has spent a painstaking amount of time going through all of this footage, narrowing it down to just shy of two hours. In doing so, he has managed to capture the moment in time splendidly. There was surely so much more to this festival than is shown. Still, his encapsulation tells the audience what they need to know, not only about the concerts but about the times and the emergence of Black empowerment. The film isn't a concert as much as it is a revelation. Most of the performances are interrupted by memories and commentary from both performers and attendees. All recollect what the show meant to them, particularly with the assassinations of King and Robert Kennedy the previous year. Even though the show might have only been green-lighted to prevent violence on the anniversary of King's death, it carried people to a higher place. The blend of all types of music with occasional comedy left the audience feeling happy and empowered, showing them that they had a place in American society. In the film, there is no more perfect example than in two performances by Nina Simone. The first is Backlash Blues, which addresses Black people being more than what the White people in power perceive and that if the latter do not realize this, they stand to lose. The second is Young, Gifted, and Black. Like the moon landing that took place during the festival and was a revelation for the nation, this song was a revelation for the audience. The footage shows realization dawning in the faces of some of the attendees that they do, indeed, matter.

Unfortunately, whether in spite of or because of it, the Woodstock Rock Festival got all the media coverage. Harlem footage was shown some on local television at the time of the festival but otherwise languished. However, because of this, it has emerged at a poignant time in history. It is perhaps more relevant now than it would have been if it had been released alongside Michael Wadleigh's Woodstock. Questlove's work shows the cyclic nature of problems and advancements, successes and failures, and that music is an integral part of all of these.

Summer of Soul is part concert, part documentary, and part statement. Like the festival itself with its mix of musical styles and cultures, all of these blend into something that transcends above itself. All audiences should look at this film through not only the lens of their own experiences but also through the glasses that others wear as well.