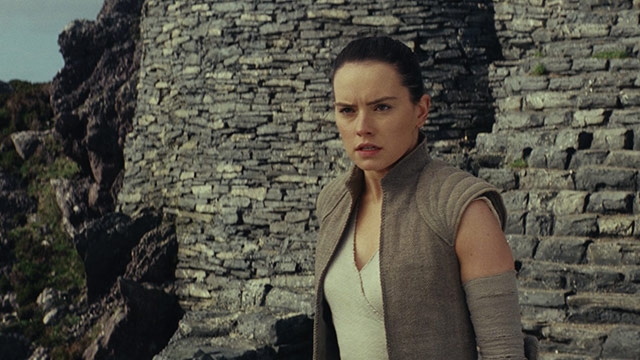 Unsurprisingly, the theater was packed at 10:00 p.m. on opening night for writer/director Rian Johnson’s The Last Jedi, the highly anticipated sequel to 2015’s The Force Awakens. The film opens in true Star Wars form, amidst a battle between the good guys—in this case, the scrappy, dwindling Resistance forces helmed by General Leia Organa (the beloved Carrie Fisher)—and the financially backed remains of the Empire, the tyrannical First Order, headed up by mysterious Supreme Leader Snoke (Andy Serkis) and Kylo Ren (Adam Driver).

Although the special effects are as cool as ever, the dialogue between Resistance pilot Poe Dameron (Oscar Isaac) and the First Order’s General Hux (Domhnall Gleeson) amounts to little more than a gag about poor cell-phone service in space that feels misplaced and disingenuous, unfitting of two highly principled fighters mid-battle in this universe. This awkward tone bodes ill for the remainder of the film.

While the cinematography is strikingly gorgeous and John Williams’ iconic, brilliant score guides the audience on their emotional journey through this latest installment of space-based intrigue, the storytelling leaves much to be desired. Johnson must have spent time in the fandom spaces of the Internet, poring over countless fan theories and fan fictions. Unable to decide which elements of each he liked the best, he attempted to pander to everyone by cobbling together too many story lines, which are peppered with blatantly contrived humor.

On the side of the First Order, nefarious Ren’s workplace rival Hux is reduced to little more than comic relief, and the supposed Supreme Leader Snoke is a one-dimensional, computer-generated Orc-type fellow who is defeated more easily than a first-round video-game boss. There is some character development for Ren himself, who remains torn between the dark side and the light. That’s only natural, given his light-side parentage, family drama, and apparent kinship with Force-sensitive badass Rey (Daisy Ridley). However, rather than diving into this internal conflict and fully setting Ren up for an epic redemption arc, the script turns him into a wildly unpredictable caricature whose future is completely uncertain.

As for the ever-persistent Resistance underdogs, Stormtrooper-turned-hero Finn (John Boyega) teams up with Dameron and new friend Rose Tico (Kelly Marie Tran) as they hatch a plan: They attempt to board the First Order’s ship and disable their tracking device long enough for the main Resistance ship to escape. While the ensuing adventures—including a pit stop that Finn and Tico make in what is essentially Space Las Vegas—are classically Star Wars, there isn’t enough time to flesh out Tico’s character or this plot line in general with so many other stories going on.

Meanwhile, Rey receives a watered-down Jedi crash course from elusive, cranky Luke Skywalker (Mark Hamill), all while harnessing the ability to have oddly sympathetic conversations with archnemesis Ren via Force-related telepathy. Rey’s substantial growth as a character, which includes her understanding of both the Force and her own place in the universe, is the most satisfying element of the movie, and it will be exciting to see how she continues to evolve in the next film.

There are more than a handful of amusing moments, cool creatures, and classic callbacks in The Last Jedi, and the action is a blast and a half to watch. However, these facets are overshadowed by the bloated, sloppily edited plot. Had Johnson pared things down and chosen perhaps two stories to focus on rather than three, this might have been a more satisfying middle installment. Maybe the novelization of the film will provide some more insight, but in the meantime, fans can hold out hope for a more polished, cohesive Episode IX.