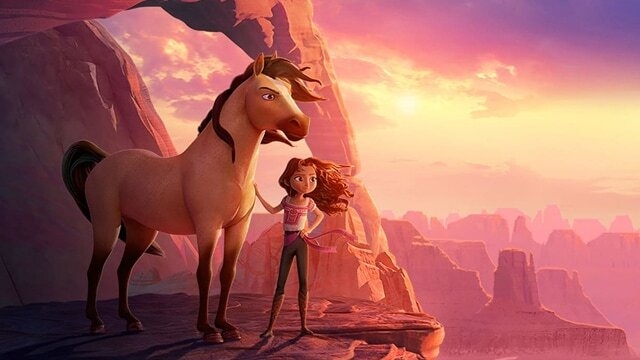 There is nothing truly special about Spirit Untamed, but that might not even matter. The film’s target audience will likely eat this up, as co-directors Elaine Bogan and Ennio Torresan attempt to bring the old western frontier to life. Full of bright colors, horses and adventure, young children will be glued to the screen, it’s just the rest of us that will have to suffer. The choice in animation style makes the entire film come across as a budget TV show and is a far cry from the original Spirit’s beautiful hand-drawn animation. Based off the Netflix series, Spirit Riding Free, many parents will know exactly what they are getting into, and young fans of the show will be ecstatic to see their favorite characters on the big screen.

Lucky Prescott (Isabela Merced) is going back home. After years of living with her grandfather, the family decides to let her stay with her father, Jim (Jake Gyllenhaal), for the summer. Accompanied by a suitcase and Aunt Cora (Julianne Moore), Lucky gets on the next train to Miradero. On her way to the old southwestern town, Lucky becomes entranced by a herd of wild horses, while one in particular stands out: Spirit. Named for his rambunctious attitude and resilience to be corralled, Spirit keeps Lucky and her new friends, Pru (Marsai Martin) and Abigail (Mckenna Grace), busy all summer. While everything appears to be going smoothly during the hot Miradero summer, a gang of outlaws hangs back in the shadows, just waiting for their time to strike.

Spirit Untamed touches on a few inspiring themes for young children, mostly focusing on what it takes to be fearless and how to stay true to yourself. Lucky comes from an uncommon upbringing, and the movie makes sure to show off her individuality, her sense of wonder, and most importantly, her determination. These are all admirable topics to touch on; it is just a shame the all-encompassing film is so dull.

Although this picture is tedious, a few positives shine through the cracks. The voice acting from the main cast, specifically Lucky and her friends, is noteworthy. The chemistry among the trio is there, and without it this movie would have been a total disaster. This performance culminates during Merced’s rendition of Spirit Untamed’s original song, “Fearless.” The same cannot be said for Gyllenhaal’s performance, as his character never truly matches his voice, a blatant miscast that fails to fit in the movie.

From the get-go, Spirit Untamed moves at a snail’s pace. By the end of the 87-minute run time, the audience will realize that this story could have been condensed into another 25-minute Netflix episode. There was so much potential here for a beautiful setting, but the art design is excruciatingly bland, and the lack of detail in the surrounding world is very off-putting. Spirit Untamed aims for a very specific target audience, and it most likely succeeds on that front. Unfortunately, other viewers will be stuck looking at their watches, wondering how many more minutes until the credits roll.