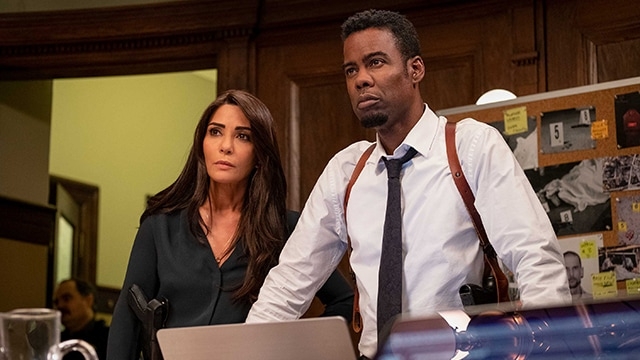 Spiral is a horror crime torture film that relates to the Saw franchise. Detective Zeke and a new partner are tasked with solving a mysterious new series of killings that seem like they may have a copycat on their hands, posing as the new Jigsaw. As they get deeper into the dangerous puzzle, they realize that there are many lives on the line, including their own.

After a raid gone wrong, lone wolf Detective Zeke Banks (Chris Rock) is stuck with rookie William Schenk (Max Minghella) for a new partner. Not afraid of the rules or political correctness, Zeke dishes out exactly how to survive in the business of police work and romance. He’s also not afraid to turn on his own, blowing the whistle on a corrupt partner.

Trying to live up to the legacy of his father, police veteran Marcus (Samuel L. Jackson), Zeke is out to be a good cop, no matter how bad he needs to be to achieve that goal. A slew of copycat killers, reminiscent of the Jigsaw killer of the city’s past, have taken it on themselves to put corrupt police officers in harm’s way – which are traps that will either kill them, or mutilate them. Zeke must figure out how to connect the killings and solve the puzzle before he and everyone around him are killed by these traps.

Directed by Darren Lynn Bousmen (Saw II, Saw III), there’s a familiarity about the work, as well as a fresh new take on what the franchise could become. Unfortunately, his work is strongest in making sure that there’s some frenetic action every moment of the way, without taking a breather to set up some basic character development and let everyone have a moment to decompress before the action picks back up again. The pacing is uneven with a single dimensionality enveloping all the characters in the film because there isn’t enough time spent on any of them.

Part of Zeke’s heroism is that he at least wants to do the right thing, no matter what it takes, whereas his entire police department is incredibly corrupt. It’s hard to root for a hero when the villain actually has a pretty legitimate point of view and is justifiably upset, even if that doesn’t excuse the merciless torture killings of police officers.

Additionally, the premise of the film appears to originally be about racism and how police are corrupt, but this is never exactly addressed. With most of the major characters including the police played by Black actors, it seems to defeat whatever point it hints at by actively working against itself.

Grisly, bloody violence has been the calling card of the Saw franchise, and that’s delivered in spades in Spiral, in the form of traps that the characters find themselves in. A strong premise is weakened by an attempt to copycat some of the film’s predecessors and a lack of focus on the major characters, which is additionally a misuse of the A-list talent playing them. But despite its flaws it’s still watchable enough to pass the time, albeit in a horrifying way.