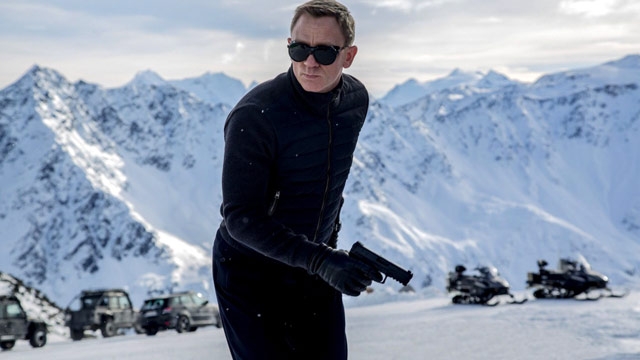 Not many movie characters are indelible enough to introduce themselves in full disguise, but on the dusty streets of Mexico City, amidst the teeming crowds of elegant skeletons cavorting in post-mortem jubilation during a Day of the Dead parade, it’s impossible for the eye to pass over James Bond, instantly recognizable even behind a full-face skull mask and dapper skeleton suit. His hombre muerto camouflage is a reminder that Bond, the double-0 staring out from his code name like the twin empty sockets of a skull, is a character surrounded by death. He has foresworn every connection to life — family, wife, children, love, creation — in favor of a joyless, murderous existence wandering the Earth, like a Biblical plague in a Savile Row suit. This Bond bonds to nobody, and while the “license to kill” may be secretly coveted by many, Spectre director Sam Mendes and actor Daniel Craig both understand that no man earns it without first carrying out a successful assassination upon his first target — himself.

The piercing strings of the theme song, as orchestrated by Thomas Newman, have never sounded so exultant, jubilant and orgasmic — an orchestra shrieking in ecstatic tongues. Spectre dances in the gate like an antsy thoroughbred from its very first frames, as if it just can’t wait to be a James Bond film, and Mendes doesn’t throttle it back, starting with the unforgettable Dia de los Muertos opening scene, where Bond pursues an evil man in white through crowds of morbid celebrants in one unbroken take spanning hotel lobbies, elevators, bedrooms and rooftops. Mendes creates a near-wordless sequence that’s not only visually thrilling, but visually literate, able to tell a story in only pictures, a skill that’s fundamental to filmmaking but strangely not a prerequisite for directing a movie these days.

Bond’s Mexican sojourn has earned him the ire of the new M (Ralph Fiennes), who, under pressure to merge MI5 and MI6 and make Britain’s spy activities more “transparent,” borrows a page from countless rogue-cop dramas and tells Bond he must turn in his badge. True, Bond doesn’t have a badge to turn in, but he does get his nose rubbed in it during a visit to the gadget laboratory of Q (Ben Whishaw), where he’s injected with a tracking device and shown a very nice car he can’t have. That’s not enough to dissuade our man, of course, and soon, without his boss’ blessing, he’s on the trail of a mysterious cabal known only as SPECTRE, with the surreptitious help of his loyal aide Moneypenny (Naomie Harris).

Mendes’ previous Bond movie Skyfall earned accolades for plumbing the mystery of Bond’s tormented psyche and shedding light on his origins, but Spectre will have none of that, choosing instead to shrug off all that uncomfortable navel-gazing with a stiff drink and go back to the way things used to be: attractive exotic women, fast cars, evil geniuses hunkering down in high-tech hideouts in the middle of nowhere, a tight scrape where a trapped Bond must listen to an adversary’s evil scheme in full before wriggling out of harm. In a post-Austin Powers world, where either homage or parody can sprout in the same fertile soil, how do you make a James Bond film that plays it as straight as the line of flesh left unpainted for safety’s sake on the actress gilded in Goldfinger? Mendes’ solution is to infuse Spectre’s visuals with poetry and taste, to make sure the sumptuous locales and precise cinematography of every frame is beyond cinematic reproach, so there’s no room for sniggering over the cheapness of it all.

But the franchise’s steel skeleton shows signs of corrosion after the appearance of obligatory “Bond Girl” Madeleine Swann (Léa Seydoux) by the second act. Honor Blackman was 39 years old playing Pussy Galore against a 34-year-old Sean Connery, but this callow and dull cutie-pie has no presence — a shame, since Seydoux was so magnetic and enchanting in Blue Is the Warmest Color. Here she’s wasted as a scowling and bland showroom dummy hitting the predictable marks of her empty “courtship” with Bond. (Monica Bellucci, in a cameo as one of Bond’s early conquests, shows acres more presence in her five minutes of screen time than Seydoux does for the entire movie.) Even though Spectre’s opening montage includes Craig’s nude body as part of the undulating landscape of flesh, it’s disheartening to reflect on how there’s still not room in the franchise for a Bond Woman.

But what do audiences want from James Bond? He can’t be all things for all people — and, despite how his tech gets more tricked-out each decade, he can’t grow with the times. An inflexibility of character is part of his own tragic nature, and he belongs in a world that is continental and old-fashioned — a fantasy of luxury and power steeped in a rich syrup of Anglophilia and masculine wish-fulfillment. (Spectre is an appropriate title for this movie because its locations and scenarios evoke the ghosts of Dr. No and From Russia With Love.) If you’re of the opinion that the Bond films are cinematic treasures that don’t need any postmodern tarting up to be meaningful or relevant or, God forbid, fun, then Spectre is a steak-and-martini dinner with all the trimmings. But skeptical moviegoers who only finally felt satisfied by the genre-exceeding complexities explored in Skyfall and were anticipating more of the same this time will come away from this go-round shaken and not stirred.