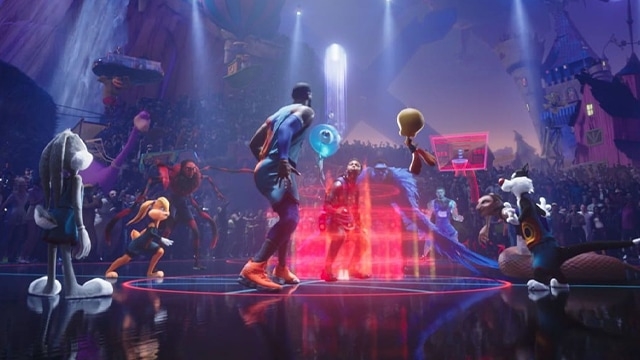 The long-awaited sequel to 1996’s Space Jam finally arrives, and Malcolm D. Lee’s reimagining of the Looney Tunes/NBA mashup is largely entertaining. LeBron James steps in for Michael Jordan, as he teams up with Bugs Bunny and the gang in the Warner Bros.’ Serververse. Space Jam: A New Legacy is entertaining, but that’s not to say it is a great movie. Much of the film’s excitement comes from mashups within other Warner Bros. properties, acting as nice little distractions to the audience in between the scenes where ‘King’ James actually has to act. For what it sets out to do, Space Jam is in large part a success; it is just a shame that it seems so drawn out. There is a decent movie wrapped up inside of this 115-minute runtime, but the bloated plot starts to give the film an aura of tediousness.

Warner Bros. has developed a state-of-the-art algorithm to pitch and create ideas for the executive staff. Al G. Rhythm (Don Cheadle), the digital vessel for the algorithm, becomes obsessed with the fact that he is getting no credit. In order for the world to take notice, he arranges to get one of the biggest superstars in the world, LeBron James, into the Serververse, where he will challenge him to a basketball game that will be livestreamed across the planet. Al G. Rhythm ends up brainwashing LeBron’s son, Dom (Cedric Joe), and LeBron must beat Rhythm’s basketball team in order to save himself, his son, and all of his biggest fans. With a quick trip to Looney Land, and with Bugs Bunny at his side, LeBron starts to reassemble the looniest cartoon basketball squad ever to exist: The Tune Squad.

The plot here is so convoluted and nonsensical, that it can almost take the audience right out of the movie. Luckily, the film constantly reminds you not to take anything too seriously, and much of the insanity can be forgiven. What cannot be forgiven is the awful acting littered throughout. Lebron’s acting is unsurprisingly poor, and it is so bad that it makes some of his scenes extremely hard to watch, as you feel a tangible sigh of relief when Bugs or Lola Bunny jump in to save the scene. Even the established actors like Cheadle struggle here; it feels like the live animation combo creates some awkward moments.

The most entertaining part of Space Jam: A New Legacy is when LeBron and Bugs go out and try to assemble the squad. All the Looney Tunes have moved on to bigger and better things within the WB Serververse, so the unlikely duo travel far and wide to some of the most widely known Warner Bros. properties. Lee’s appreciation for nostalgia really shines through here, and the audience is constantly treated to cool Easter eggs sprinkled throughout the film. The animation and special effects are also top notch, from the more classic “hand drawn” style to the 3D models. Looney Tunes is at its best when chaos takes over on screen, and Lee absolutely makes sure of that.

Most likely, anyone who goes to watch Space Jam: A New Legacy will know exactly what they are getting into. At its best, the film is a fun throwback to all things WB, highlighted by the beloved Looney Tunes franchise. At its worst, Space Jam is a slog, cluttered with terrible acting and a truly nonsensical story. For fans of the original Space Jam, this is likely to be enjoyed, albeit a slight disappointment. For everyone else, Space Jam: A New Legacy will come off as another run-of-the-mill feature, with some cool cinematic nostalgia weaved in.