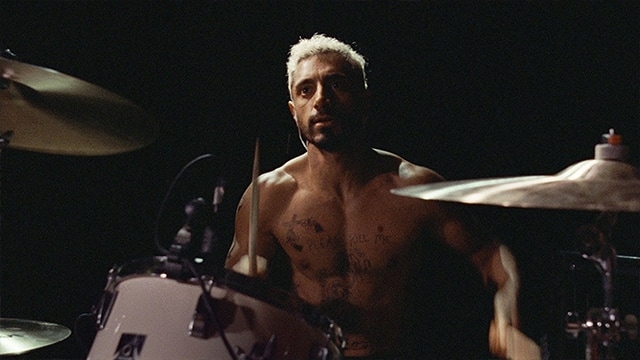 Sound of Metal is a unique story that finds a way to complement itself throughout the film. Whether it’s the acting, the storytelling, or the direction, there is always a component of the film which is in control, and the other aspects play as peripheral enhancements. Darius Marder, who directed and co-wrote the feature, constantly plays to the strengths of Sound of Metal. This is not a perfect movie, but when things start to get murky or just a bit too slow, Riz Ahmed’s masterful performance props everything right back up. Sound of Metal is a revolving door that reveals bits and pieces of masterful filmmaking, all guided by a heart-wrenching story that will linger with viewers for a while after the credits roll.

Ruben (Ahmed) and Lou (Olivia Cooke) are traveling across the country touring for their up-and-coming metal band. With Lou on vocals and Ruben on the drums, the couple develops a nice little following. Traveling from gig to gig in their nimble mobile home, the two are trying to make ends meet while they work on their first album. When Ruben’s hearing suddenly disappears, the couple must decide what to do next. As a former addict, Ruben must fight the urge to use again, and Lou pushes him to visit a small community for the newly deaf who have also battled addiction. Helmed by a former alcoholic, Joe (Paul Raci), Ruben starts his journey to accept his hearing loss.

The most impressive part of Sound of Metal is Marder’s knack for knowing his talents, as well as the talents of everyone else involved. The film is shot with a very minimalistic tone, never forcing the audience how to feel; instead, each scene can drive any number of emotions into the viewer’s mind. He also takes a brilliant approach with the sound design, always picking and choosing how the audience will hear a certain scene or conversation. From Ruben’s point of view, we can experience the pure pain and anguish he is going through, as his realizations become clearer. We also get the opposite effect from a character like Lou, who is just as helpless in the situation and has no idea how to handle it. All of this culminates in a beautifully chilling final sequence that has the potential to freeze the audience where they sit as they process the film in its entirety.

Of course, this is all augmented by Ahmed’s performance, who is somehow able to convey just a sliver of the dread and acceptance that a person in his position would go through. This is a man who was on the track to become a rock star, and then those hopes and dreams are severed almost instantly. Ahmed’s transition from a blank stare of awareness to a spontaneous fit of blind rage can be difficult to watch, but only for the pure dread it makes the audience feel.

The only minor downside to the movie would be the story’s lack of a tangible timeline. Everything seems to happen so fast, and Ruben’s journey is very direct, but it is hard to really tell how long each phase lasts. This is a very small critique, but it would have been nice to have a more coherent vision of Ruben’s development.

Sound of Metal is emotionally draining, but at the same time viewers will not be able to look away. The combination of Marder’s vision and Ahmed’s acting will have them completely vested for the 120-minute run time, and as mentioned above, may stay with them long after that. Equipped with a beautiful story, an interesting experiment in sound design, and a masterclass in acting, Sound of Metal is definitely a must-see feature.