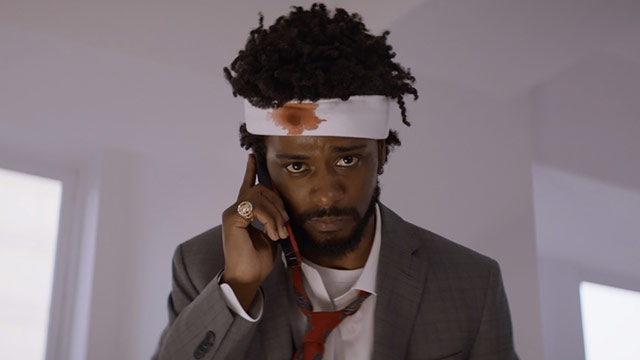 Sorry to Bother You, written and directed by Boots Riley, is a psychedelic journey into a macabre universe that, despite the nightmarish qualities, I didn’t want to leave. Lakeith Stanfield delivers a comical performance as Cassius ‘Cash’ Green, a broke African American man living in his uncle’s garage, and Stanfield does a great job representing a guy who questions the existential nature of his life. His lighthearted yet sophisticated girlfriend Detroit, played by Tessa Thompson, offers Cassius a companion to express the concerns of living a successful professional life and leaving a mark on the world before he goes.

After getting hired as a telemarketer, Cassius Green is told to use a “white voice” when making pitches to customers via cold calls. Hilarity ensues when a creative twist on lip syncing sees an actual white voice actor (David Cross) speak over Green when he starts using the “white voice.” Armie Hammer also transports himself into a deranged role as Steve Lift, the antagonist CEO of a major wellness company, and hysterical exchanges are in abundance when Cassius and Steve meet one another.

In addition to the mesmerizing acting, the directing of this film is incredibly intriguing. Boots Riley’s use of jump cuts particularly stands out and is most prominent during scenes where Cassius is cold calling potential customers; whenever someone answers his call, Cassius is moved from his office setting and dropped right into the customer’s house for the duration of the call. It’s a cinematic illusion that is uniquely creative.

In terms of relevance to society, Riley does a great job stretching the boundaries of his creative license. His film is not blatantly used as a societal device, but is more of an existential and moral tool, and everything incorporated can be up for interpretation. Steve Lift is a malicious man with questionable moral intentions - really questionable moral intentions - which could be a gut punch to capitalism. Incredibly wealthy individuals don’t always get to their position by doing the right thing, and those who do earn their status don’t always handle their power correctly. Lift is highly representative of this kind of behavior. There are also undertones of disproportionate wealth distribution, seen in the dichotomy between Stanfield’s character and Hammer’s character.

As a whole, Sorry to Bother You is very inventive in regard to comedy and satire. Boots Riley’s film blends comedy, science fiction, and fantasy, and does so successfully, hardly an easy task to accomplish with any mix of genres. In his direction, Riley appears cognizant of the importance of execution when mixing genres like this, and he delivers spectacularly. There are a few moments in the second and third act where more clarity is needed regarding the subject of certain scenes. However, this is the kind of movie that deserves to be re-watched and re-analyzed for years to come.