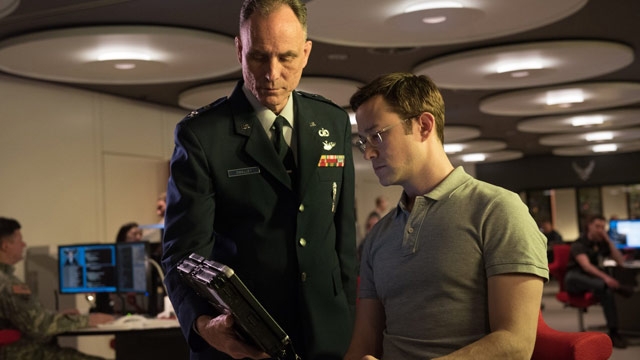 Sometimes you’ll see a compelling documentary and wonder: Was this actually a great work of filmmaking, or did they find a true story so interesting that even a merely competent take on it would hold your interest? Oliver Stone’s Snowden, ironically, faces an even trickier dilemma, as it’s a dramatization of true events that have already been captured in a staggering, first-rate documentary (in this case, Laura Poitras’ Citizenfour). It begs the question: Does the docudrama approach add anything in this case that a nonfiction account or journalistic reporting couldn’t offer? Frustratingly, the answer is no. Snowden might be a gripping thriller (with this subject matter, how could it not?), yet it feels like a lot of the nuance has been ironed out of it in order to fit into a conventional, 134-minute narrative.

Edward Snowden is played here by Joseph Gordon-Levitt, and like a lot of JGL’s recent performances, he manages to build a fully formed character out of small details and gestures while never letting you forget how hard he’s working. Snowden is a patriot who would do anything to serve his country, and when his slender build causes him to wash out of Special Forces training, he instead turns his focus to intelligence work. His mentors are Corbin O’Brian (Rhys Ifans), a slithery instructor of new recruits who rolls his eyes whenever someone mentions that unauthorized surveillance is unconstitutional, and Hank Forrester (Nicolas Cage), a computer guru who was demoted when he started asking basic questions about whether intelligence work is about stopping terrorists or catering to the whims of military contractors. Stone skips through this setup quickly with the expected scenes: O’Brian orders the recruits to complete a difficult programming task in five hours or less, Snowden finishes in under 40 minutes and is told he’s a genius among geniuses, O’Brian takes Snowden his wing and gets him a plum assignment in the CIA, etc.

But the film’s primary relationship is between Snowden and his girlfriend Lindsay Mills (Shailene Woodley), and while on the surface they’re a study in contrasts, the screenplay never really digs that deeply into either what bonds them together or what tears them apart. They meet for the first time in a coffee shop after flirting online through a dating website called “Geek-mate,” and their small talk leads to the film’s most awkwardly written scene when they stroll past a group protesting Bush’s handling of the Iraq War. Mills announces she’s a liberal who’s against the war, Snowden says he’s a conservative who thinks liberals are naïve to think you can have peace without fighting for it, and the movie’s political analysis basically stops there. It’s fascinating that a whistle-blower like Snowden starts off as a neoconservative, but a bleeding-heart liberal like Stone isn’t able to depict the latter mindset without resorting to a few stock phrases (Snowden informs Mills that the “liberal media” isn’t telling her everything, then declines to say anything more).

For that matter, what keeps Snowden and Mills together, given that they see the world so differently? A few scenes hint at some intriguing answers: Despite her pacifism, Mills is excited to be so close to the spy game (she and Snowden briefly assume fake identities when he tries to befriend a Middle Eastern banker who may have terrorist ties), and she’s an artsy type who appreciates that her partner is able to support her career as a photographer. Woodley brings so much charisma and confidence to the role that Mills never feels like just a symbol, even though she’s clearly the film’s heart and moral conscience -- the only person who truly loves Snowden and yet is able to call him out on his hypocrisies. But the script’s formulaic nature lets her down. At a certain point, Mills turns into that most one-dimensional of cinematic archetypes -- the nagging partner -- as the movie cycles between Snowden growing obsessed with his work, him vowing to quit and lead a quiet life after a fight with Mills, then Snowden returning to an even higher-level position when he’s convinced his country needs him. Gordon-Levitt and Woodley have chemistry together, but we never intimately feel the impact that Mills is having on Snowden.

It all builds, of course, to the moment when Snowden realizes he can’t take any more and that he must expose the extent of the U.S. government’s surveillance program. His breaking point, as depicted here, is when O’Brian reveals that he’s been spying on Mills’ private life to such a degree that he can assure Snowden that his fears that she’s cheating on him are unfounded (an even creepier scene early on shows a reluctant Snowden and a fellow tech watching a woman get undressed from the point-of-view of her laptop’s web camera -- despite the fact that her computer is supposed to be turned off, and that her only crime is that she’s the sister-in-law of someone who may be connected to financing terrorism). Stone resists the urge to juice up the final set piece that much, and while both Snowden’s theft of intelligence data and his subsequent interview with Poitras (Melissa Leo) and journalists Glenn Greenwald (Zachary Quinto) and Ewen MacAskill (Tom Wilkinson) go off without any major hitches, they both feel incredibly tense.

This is ultimately the Hollywood version of Snowden’s story, a solid entertainment that presents the basic facts of what he did and why, but without adding anything we didn’t know already. It probably says something that the best parts of the movie are the segments in which Snowden ruminates on just how much privacy we’ve given up while Stone shows us a freeform collage of people all over the world communicating -- the parts, in other words, that feel most like a documentary.