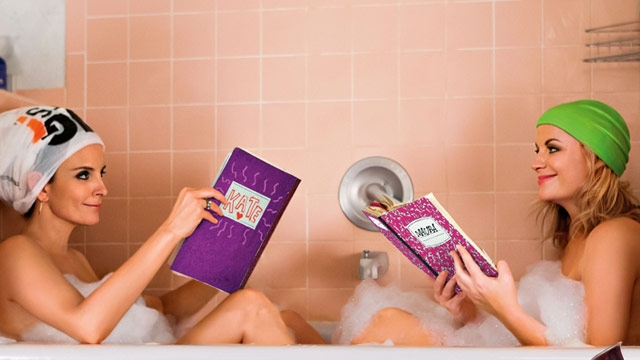 Tina Fey and Amy Poehler are two of the funniest people on the planet, so having them team up for this big-screen comedy (their first movie pairing since 2008’s Baby Mama) should be a no-brainer. Unfortunately, Sisters is a mildly entertaining muddle that serves up raunchy, adolescent humor by the bucketful and mostly wastes the talents of its two stars, who deserve much better.

Fey and Poehler play, respectively, Kate and Maura Ellis, fortysomething sisters who are horrified to learn that their parents (James Brolin and Dianne Wiest) have sold their house in Orlando and moved into a plush retirement community. The news is especially disheartening for irresponsible single mom Kate, since she had planned on moving into her old childhood home after being evicted and fired from her job as a beautician. Goody two-shoes Maura, a childless divorcée and nurse so conscientious that she sprays homeless people with sunscreen, is also aghast. When the siblings arrive at the house, they find that it’s been cleaned out — except for their memory-filled bedroom that, unbelievably, hasn’t been updated since they were high schoolers in the 1980s. Posters of Michael J. Fox, Out of Africa, and Xanadu adorn the walls and doors. Soon after the two read through their teen diaries — Kate’s boasts of numerous sexual conquests, while Maura’s extols a plethora of Good Samaritan deeds — the two decide to throw an epic party on “Ellis Island” and invite all of their old classmates. The bash will be the perfect way to part with their past, and it will allow uptight Maura to finally cut loose and, hopefully, seduce a hunky neighbor (Ike Barinholtz) she met earlier in the day.

What follows is an overlong, booze-filled, drug-infused rager that spins wildly out of control. “Adults behaving badly” isn’t exactly a novel concept, and Sisters adds nothing fresh to this stale premise despite the massive amount of talent involved. The film’s funniest moments actually occur before the party gets underway: Watching Kate and Maura desperately try to squeeze into a number of suggestive outfits at a clothing store, only to discover that they “need a little less Forever 21 and a little more Suddenly 42,” is a hoot. Also hilarious are their run-in with a haughty former friend (a riotous Maya Rudolph) at a supermarket, a visit to a nail salon where Maura continually mispronounces the name of a Korean pedicurist, and the pre-debauchery start to the evening when the middle-aged parents first arrive and sit around chatting about their kids, spouses, and surgeries. It’s the most believable scene in the movie, and it’s particularly funny because it’s so relatable to folks of a certain age.

Sisters was written by Saturday Night Live alumna Paula Pell, and in truth, it feels like an overextended SNL skit. To the extent that the movie works, you can thank Fey and Poehler and their easygoing chemistry. The two are as simpatico as Lucy and Ethel, which makes it all the more frustrating that Hollywood can’t find a vehicle more worthy of their combined comic genius than this lame enterprise.