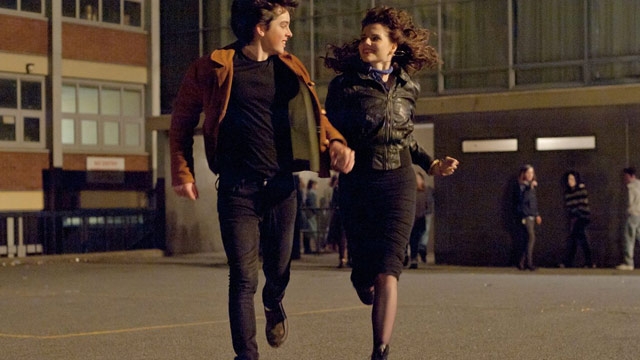 John Carney, the Irish-born writer/director of Once and Begin Again, scores another musical crowd-pleaser with Sing Street, a semiautobiographical bit of nostalgia that’s sure to excite fans of his earlier work, as well as win over moviegoers eager for uplift and genuine emotion after a season of crude comedies, violent villains, and silly superheroes.

The story, set in 1985 Dublin, begins with 14-year-old Conor (Ferdia Walsh-Peelo) learning that his cash-depleted parents need to pull him out of his upper-crust Jesuit school and enroll him in the Christian Brothers public school on Synge Street (which Carney himself once attended). Conor quickly runs into a host of problems at the new place: A stern, rules-obsessed priest (Don Wycherley) admonishes him on his first day for wearing brown shoes instead of the mandated black, and a slingshot-totting bully is eager to torment him. But things start to look up when he spies the slightly older Raphina (Lucy Boynton), a too-cool-for-school beauty who boasts that she will be traveling to London soon to become a model. Conor is smitten and asks if she would like to appear in a music video for his band. Sure, she says. There’s just one problem -- he doesn’t have a band.

Fortunately, Conor is nothing if not resourceful, and he quickly goes about recruiting classmates for his musical act, even pressuring new best friend Darren (Ben Carolan), who fancies himself a savvy businessman, to manage the group. Conor’s first recruit proves to be key: Eamon (Mark McKenna), a teenage musician who can play almost any instrument, becomes the Edge to Conor’s Bono, and the pair begin crafting infectious pop sounds influenced by mid-’80s radio hits from groups like Duran Duran, the Cure, a-ha, Spandau Ballet, and Hall & Oates. They name their band Sing Street, a clever wordplay on the school’s street address, while Raphina rechristens Conor as “Cosmo.” Conor’s stoner brother Brendan (a scene-stealing Jack Reynor) also helps out with his musical apprenticeship, as the college dropout and music aficionado schools his sibling on current trends and new, cutting-edge videos. Their heartfelt relationship is one of the film’s many highlights; the brothers dive into music, in part, to escape the near-constant bickering of their parents, whose marriage is disintegrating before their eyes.

Sing Street is filled with original toe-tapping tunes, written by Carney and former Danny Wilson member Gary Clark, that perfectly conjure up ’80s new wave, pop, and rock. Standouts include “The Riddle of the Model,” “On My Way to Find You,” and “Drive It Like You Stole It,” the latter number being the focus of a Back to the Future dream sequence in which Sing Street plays at a high-school prom.

Sing Street’s boy-meets-girl story is as tried-and-true as they come, but Carney’s fresh-faced cast make it feel authentic and new. Walsh-Peelo, who is in nearly every scene, exudes sweet-natured innocence at first, and believably evolves into an emerging rock star with genuine sex appeal by film’s end. Equally compelling is Boynton, whose orphaned Raphina is, beneath all the heavy glam makeup, just a lonely, misguided teen yearning for affection. You can’t take your eyes off of her when she’s onscreen.

Sing Street is the very definition of a feel-good movie. While it does explore issues involving divorce, domestic abuse, and bullying, Carney never allows those elements to overwhelm the film. Instead, they add rich dimension to what could easily have been a routine love story. And it’s a love story with a fanciful, fairy-tale ending that, while far-fetched, comes off as note-perfect in this director’s sure hands.