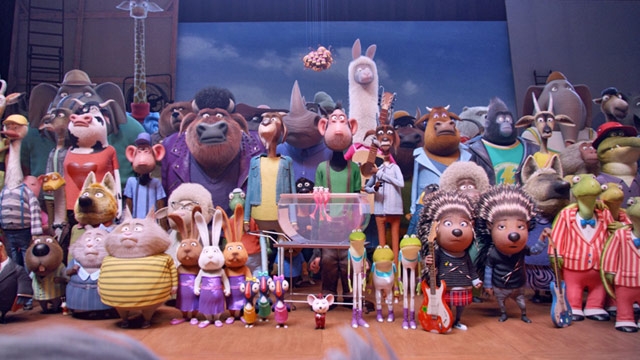 Buster Moon (appealingly voiced by Matthew McConaughey) is a cute, showbiz-loving koala bear with an odd Texas twang, and he’s facing foreclosure on his theater due to a string of cash-sapping flops. To turn the tide and stall the bank, Moon decides to produce a singing competition, offering one thousand dollars -- his last bit of savings -- as the top prize. Unfortunately, a typo on the fliers promoting the event ups the winning amount to one hundred thousand dollars, which, of course, Moon does not have. The upshot, however, is that a plethora of aspiring singers, eager for fame and fortune, show up at the theater to try out. These auditions, much like the ones on American Idol, range from the sensational to the shuddersome, and provide Sing with several of its most amusing moments (one of the best is the sight of a slight snail warbling a solo while perched atop a microphone).

Moon soon settles on his lineup, and it includes: Rosita (Reese Witherspoon), a stressed-out sow with 25 piglets; Mike (Seth MacFarlane), a brash mouse who’s a Rat Pack-like crooner; Ash (Scarlett Johansson), a punk-rock porcupine; Johnny (Taron Egerton), an agreeable teen gorilla trying to free himself from his father’s criminal lifestyle; Gunter (Nick Kroll), a flashy oinker who hogs the spotlight; and Meena (Tori Kelly), a shy elephant with a severe case of stage fright. The show initially seems like it’s going to be a big hit, but then, everything suddenly goes terribly awry.

Illumination, the animation studio that produced the popular Despicable Me, the likable The Secret Life of Pets, and the disappointing Minions, isn’t in the same league as Disney or Pixar yet -- as Sing once again proves. The movie does get off to a promising start as the characters are creatively introduced, yet after Moon’s talented cast are assembled, the story’s midsection drags -- it’s never quite boring, but it comes dangerously close. Fortunately, the filmmakers have acquired the rights to some 65 Top 40 hits and classics (“Shake It Off,” “Firework,” “Don’t You Worry ‘Bout a Thing,” “Call Me Maybe,” “Golden Slumbers/Carry That Weight,” etc.), which continually pop up on the soundtrack to engage viewers’ ears (if not their minds). The main problem is that there really isn’t much at stake. Sure, Johnny gets in a scrape with his thuggish dad, Mike is chased by gamblers he owes money to, and Buster may lose his theater, but none of these story lines add much punch to the proceedings. The script, written by director Garth Jennings (Son of Rambow), isn’t much concerned with plot, in-depth characterizations, or logic (for example, it’s never explained how a one-night concert with only a few performers is going to raise enough revenue to prevent the theater from closing). Instead, Jennings is too busy trying to shoehorn in as many song snippets as possible.

With that said, Sing does deliver in its crowd-pleasing finale, during which the concert finally takes place. Each contestant soaks up the spotlight and is allowed to sing full versions of their songs, with the standouts being Egerton’s rousing rendition of “I’m Still Standing” and MacFarlane’s swinging take on “My Way.” The infectious joy Sing summons up in its closing third is almost enough to make you forget its lackluster middle. Fans of Illumination’s other titles will no doubt be amused by the company’s latest offering, but anyone expecting to be transported to a whole new world -- like they were earlier this year by the terrific Zootopia or the adventurous Finding Dory -- may find themselves singing the blues.

Alvin and the Chipmunks: The Road Chip—The AllMovie Review

Alvin and the Chipmunks: The Road Chip—The AllMovie Review