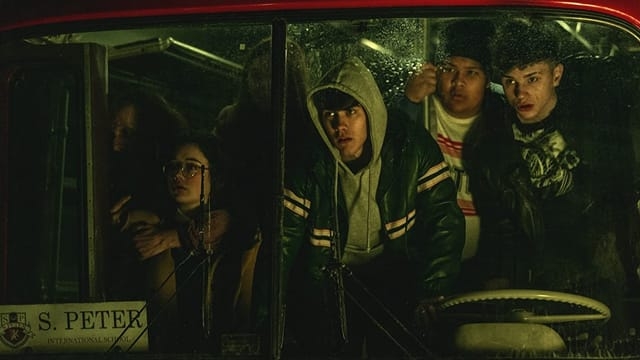 Shortcut is a morality tale horror story with an ensemble cast of teens fighting for their lives. When a group of students gets their bus hijacked by a serial killer who decides to take a shortcut through a dark tunnel, they discover a hungry monster with a taste for humans.

Five teens have a tediously long ride from school back to their homes deep in the woods. When a fallen tree blocks their road, the driver must take a shortcut, where the road is also blocked, but this time by a dead deer. Unfortunately, it’s a trap from a killer intent on hijacking the bus and leading them astray.

When the kidnapped bus proceeds into a dark tunnel, it suddenly breaks down. Even more unfortunately, there is something outside the bus that’s hungry for human flesh. Worse still, it knows how to get into the bus; so, waiting inside is not an option.

Fleeing into the darkness, the teens believe their only choice is to go deeper underground, where they discover a secret compound. But now, the kids must either put aside their differences and come together in order to become the predators, or all die as the prey to a monster they can barely even see.

Directed by Alessio Liguori, there’s a distinct feeling of controlled chaos in Shortcut. Even when everyone is screaming on screen, the puppet strings are at work to move them along neatly to the next major set piece. The drama within the group is handled just as well as the unfolding drama they must all face together. The lack of modern shock horror such as surgery, sound hits, and gruesome schlock is thankfully absent, denoting a true pro.

Screenwriter Daniele Cosci manages to make her characters smart enough to ask people to come to the bathroom with them so that they’re not alone with a monster lurking, but still foolhardy enough to make the typical mistakes that teens are prone to do. However, the creativity found in the middle and end of the film is lacking in the beginning, as though the script were too short and needed some padding to extend it. It could easily have been trimmed down by fifteen minutes and likely would have worked better.

One of the key selling points of Shortcut is the incredible energy and committed enthusiasm of its ensemble cast. With a creature that rarely shows its face, their dedication to continuously pumping their own adrenaline and conflicts within their own peer group brings the film up a notch, and out of the campy, or comedy realm that horror films often devolve to.

Ultimately, there’s enough to like here to make Shortcut an enjoyable way to pass the time. But as an unlikely and innovative mash-up of The Breakfast Club and Predator, it doesn’t come anywhere close to the classics that it’s taking notes from. The coincidence meter is turned up to a level of ridiculousness, which harshly contrasts with the very serious tone throughout the film. Despite its flaws, it somehow comes together as a satisfying film.