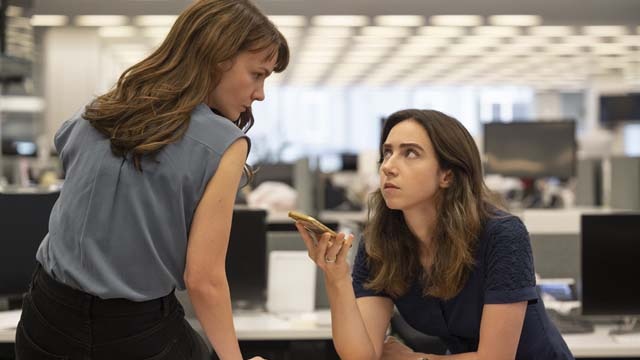 She Said, directed by Maria Schrader, is a powerful and moving drama about the women and the reporters who helped propel the #MeToo movement in which millions of women were able to detail their horrific and painful memories of sexual harassment and assault. She Said stars Carey Mulligan (Promising Young Woman), Zoe Kazan (The Big Sick), Patricia Clarkson (The Station Agent), Andre Braugher (Glory), Jennifer Ehle (The King’s Speech), Samantha Morton (Minority Report), and Ashley Judd (Double Jeopardy).

The film covers the true story of New York Times investigative reporters Megan Twohey (Mulligan) and Jodi Kantor (Kazan) as they face countless obstacles while trying to expose the sexual abuse allegations against Hollywood producer Harvey Weinstein. This unprecedented article ends up being one of the major factors in launching the #MeToo crusade. It exposes the decades of abuse against vulnerable young women at the hands of powerful men in Hollywood. It is also based on a book written by Kantor and Twohey about their experiences, with the screenplay adaptation by Rebecca Lenkiewicz.

The film shines in the moments it focuses on what is important: the victims, the efforts of the journalists, and the beginning of a pivotal moment in society which gave sexual assault victims their voices back. In a time where movies and TV shows (like Dahmer—Monster: The Jeffrey Dahmer Story) focus on the perpetrator of heinous acts, She Said stands out as an example of how you can instead highlight the survivors, the heroes, and the wrong-doings within a culture without further immortalizing the criminal.

The standout performances of Ehle as Laura Madden and Morton as Zelda Perkins, both victims of Weinstein, were outstanding. Their stories are moving and heartbreaking. They brought tension and heartache amongst the identical re-tellings of Weinstein’s atrocious actions.

She Said isn’t without its flaws. While important and thoughtful, the film often suffers from filler-syndrome in which full scenes are added, seemingly for atmosphere, but do not move the plot along. At times, this 128-minute film feels drawn-out and slow. In addition to that, there are storylines that are unfinished or left hanging, mainly the personal lives of the main characters.

During the events of the movie, it is apparent that Twohey has a baby and suffers from post-partum depression. Kantor has an equally-as-busy husband and two children who need their full attention. While these struggles are introduced, they are not fully addressed or resolved in any way. This begs the question: why add in these subplots if they are not going to affect the main story?

The movie feels like a film for those who already knew the background of the Weinstein case. Names are thrown around without much effort in helping the audience understand or keep characters apart. The scene transitions are sometimes jarring. However, it is an important movie and worth a watch. The stories of the women are engaging. The performances are spot-on. She Said is a film that needs to be seen by everyone.