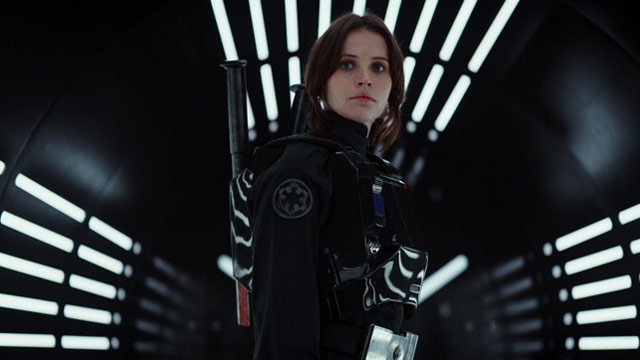 Here’s an excerpt from the title crawl at the beginning of the original Star Wars: “During the battle, rebel spies managed to steal secret plans to the Empire’s ultimate weapon, the Death Star…“ That’s it, and that morsel of an elevator pitch is what’s spun as thinly as a nano-nylon thread into the whole cloth of Rogue One, the first of many spin-offs Disney has planned for its golden goose. The Mouse House’s thumbprints are all over it from the beginning, which has a new symphonic theme (by Michael Giacchino, Pixar’s go-to composer) and no title crawl, just a jump into the action. But don’t be fooled by the promise of a fresh start: This is a cynical fracking of whatever love fans have for this franchise out of the fractured shale of their hearts.

The plot, an attempt to squeeze one more movie out of a used MacGuffin, follows Jyn Erso (Felicity Jones), the young daughter of reluctant Death Star architect Galen Erso (Mads Mikkelsen). Her father attempted to get away from the Empire’s doomsday weapon by retreating with his family to a quiet, rural existence, but when he’s captured by Imperial project director Orson Krennic (Ben Mendelsohn), Jyn must run for her life. Fast-forward ten years, and she’s now a felon imprisoned in a facility where, apparently, smoky eyeliner is still available. She’s recognized for her usefulness to the Alliance by the allegedly dashing spy Cassian Andor (Diego Luna) and the slump-shouldered robot K-2SO (voiced by Alan Tudyk). After busting her out, they assemble a Seven Samurai-style team for a daring mission to steal the Death Star blueprints; the squad includes an Imperial defector (Riz Ahmed) and a blind Jedi named Chirrut Îmwe (Donnie Yen) -- he might as well be named Zatoichi -- who incessantly mutters, “I am with the Force and the Force is with me,” as if trying to convince us all.

There is nothing inspiring in the first hour and 30 minutes of this movie. There is exactly one moment of poetry -- a shot of X-wings coursing through a monsoon, their engines illuminating the needle spray of raindrops in front of them -- but the rest (90 minutes! Enough for an entire other film!) is a long travelogue slog of gloomy exposition performed on one planet after another. Yet there’s a sudden changeover in the final 45 minutes, as if the movie got defibrillated, and suddenly there’s a richness and grandeur and magic befitting the Star Wars saga. The difference is so remarkable that it begs the question of whether Rogue One would have been more successful as a short instead of a feature.

But the final act isn’t the only thing reanimated in this movie, and to discuss the most sorrowful, hurtful aspect of this glum miscarriage requires spoilers, so brace yourself: There are two human characters in this film who have been recreated as CGI constructs. One of them is the dearly departed Peter Cushing as Grand Moff Tarkin, whose narrow-shouldered avatar looks like a forlorn little rag doll stranded in the Uncanny Valley, and whose necromantic performance takes the “peace” out of “Rest in Peace”. The other, more horrifyingly, is of a dewy-cheeked Princess Leia, looking like she did when Carrie Fisher was a 19-year-old unknown in braid buns. To be fair, the very-much-still-alive Fisher (who has tartly observed, “I signed my likeness away. Every time I look in the mirror, I have to send Lucas a couple of bucks.”) must have consented to this at some legal juncture, but that still doesn’t take away the sting of this new step in that famously cynical axiom about the shelf life of an actress in Hollywood: “Who is Carrie Fisher” becomes “Get me Carrie Fisher” becomes, not “Get me a younger Carrie Fisher,” but instead, “Get me Carrie Fisher, young.” A movie that makes a big show out of having a female protagonist and then pulls a malleable facsimile of nubile flesh from its digital brothel is not a step forward for women in Hollywood.

The original Star Wars was a comforting tonic for an alienated era, one that translated the ancient wisdom of the Hero’s Journey into space-age language for modernism’s lost and frightened children. But now, 40 years later, the Lucasfilm/Disney hydra has sociopathically strip-mined our pure and childlike adoration to give this movie an emotional core it can’t generate on its own. It siphons out the real pain of the Syrian conflict to smear cheap Orientalism and borrowed distress on the destruction of very familiar-looking “exotic” planets, and pleads false innocence if the resemblance twinges too strongly. (The dissonant sight of an AT-ST picking its destructive way through an Aleppo-like alien city is something out of J.G. Ballard.) And it reanimates the dead while gaslighting us into conflating necrophilia and nostalgia. This technically proficient but morally bankrupt film gives nothing and takes everything. It is a work of deep nihilism that embraces Kieron Gillen’s observation that “nostalgia is an emotion for people with no future” as its manifesto. The conclusion of a movie shouldn’t leave you wishing it was the beginning of a better one. And the conclusion of a movie about a fictional future shouldn’t make you tremble for the real one.