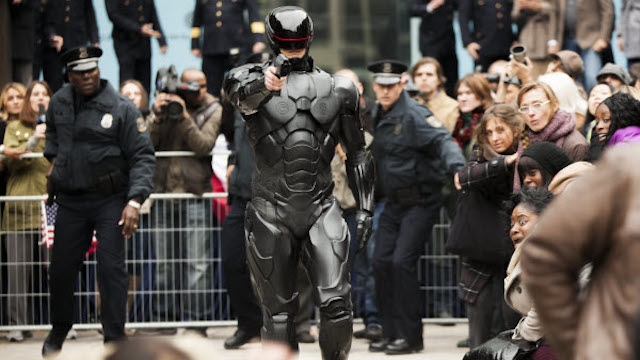 In the great debate over when a remake is actually justified, José Padilha’s RoboCop occupies a particularly frustrating area right in the center: Distinctive enough story-wise that screenwriter Joshua Zetumer can’t be accused of writing it in his sleep, yet largely devoid of the subversive satire and over-the-top violence that elevated the first version, it could exist comfortably alongside the original film’s misguided sequels and spin-offs if not for the fact that it’s an origin story through-and-through.

The year is 2028. Cutting-edge robotics company OmniCorp has been supplying the American military with drones for use overseas, though their repeated attempts to bring the technology stateside have been met with fierce resistance—most notably in the form of Senator Hubert Dreyfuss (Zach Grenier), who has sponsored a bill that outlaws the use of robots on U.S. soil. When devoted family man and upstanding Detroit policeman Alex Murphy (Joel Kinnaman) is grievously wounded by a car bomb, however, OmniCorp CEO Raymond Sellars (Michael Keaton) recruits top scientist Dennett Norton (Gary Oldman) to transform Murphy into a prototype half-man/half-robot crimefighter known as RoboCop. When initial tests fail to provide the results OmniCorp had hoped for, Norton reprograms his creation to operate strictly on software rather than human emotions. Later, RoboCop finally hits the streets, and the citizens of his crime-ridden city welcome him with open arms. But as Murphy's emotions begin to interfere with his programming, he sets out to find the criminals who nearly killed him and ensure that justice is served. In doing so, he uncovers some secrets that his creators at OmniCorp, as well as his corrupt colleagues on the force, would kill to keep hidden.

In the original RoboCop, director Paul Verhoeven and screenwriters Edward Neumeier and Michael Miner used the conceit of a slain policeman resurrected as an invincible robot cop to offer clever commentary on corporate capitalism and the American media. With an introduction that features Samuel L. Jackson as a blowhard conservative commentator who wouldn’t be out of place on, say, Fox News, Padilha’s remake appears to have its priorities straight as it plunges us right in the middle of the heated drone debate. Yet the more Jackson’s character evokes fear to try to justify the need for militarized security on the streets of America, the more apparent it becomes that satire isn’t Zetumer’s strong suit; there’s nothing particularly smart or original about this particular brand of parody, and when a live broadcast aimed at easing the public’s fears goes horribly awry, it quickly becomes apparent that the film’s violence has been compromised just as much—if not more so—than the satire.

Meanwhile, Alex Murphy, a loving husband, caring father, and driven cop, has been working with his partner Jack (Michael K. Williams) to gather evidence to arrest notorious criminal kingpin and underground arms dealer Antoine Vallon (a particularly bland Patrick Garrow). By focusing more on Murphy’s transformation into RoboCop and the inner conflict that metamorphosis sets into motion (not to mention having him appear without his mask for much of the film), Zetumer attempts to inject some human pathos into the story, but that dramatic momentum seems to get muddled somewhere between Kinnaman’s (appropriately) stiff performance and Zetumer’s inert sense of storytelling.

Although the screenwriter does manage to serve up a few unexpected surprises (such as a gruesome scene in which a conscious RoboCop is systematically disassembled), he makes two major missteps: Murphy’s near-death incident is far less personal here, and he fails to conceive a villain (or villains) that will keep us cheering for RoboCop once the stakes turn serious. Sure, it’s fun to watch Michael Keaton play against type as the greedy yet outwardly benevolent OmniCorp CEO who’s got the majority of the local politicians in his back pocket, or to see Jackie Earle Haley as a robotics expert with a chip on his shoulder, but measured against the evil Dick Jones and sadistic Clarence Boddicker from the original, there’s just no competition. And while, as the morally conflicted scientist who created RoboCop, Gary Oldman tries to bring out his character’s tormented conscience, the actor’s uncharacteristically muted performance finds him simply fading into the mix.

The story arc about RoboCop’s internal struggle to overpower his programming and reconnect with his family is an intriguing one on the surface, but really, most people who spend their hard-earned cash on a ticket to a blockbuster about a robot cop would rather see that cop cleaning up the streets than envision him tossing the pigskin with his son in the front yard. And speaking of action, aside from a few brief (and oddly repetitive) shoot-outs, that’s yet another component that’s sorely lacking here—just another reason why, despite Padilha and Zetumer’s best efforts to make the story their own, this ambitious remake ultimately crashes like a corrupt hard drive.