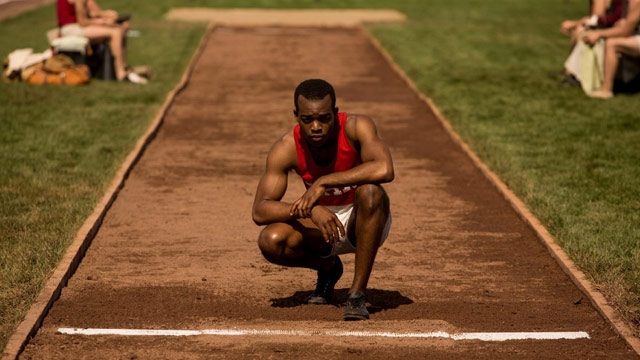 The first, fateful meeting between Ohio State freshman Jesse Owens (Stephan James) and head track coach Larry Snyder (Jason Sudeikis) doesn’t go swimmingly. Segregation etiquette demands that the Alabama-born Owens not make eye contact with the white man who’s called him into his office to discuss his place on the university’s track team. Snyder will have none of that. “Your mother didn’t teach you right,” he snaps with characteristic bluntness. “She should have taught you to look a man in the eye.” Snyder doesn’t need an athlete on his team who’s too cowed by racism to live up to the extraordinary talent he demonstrated during that afternoon’s practice. The 1936 Olympics in Berlin are only a few years away, and Snyder knows gold-medal material when he sees it. Can this freshman meet that promise?

Owens’ marathon journey from college jock to immortal Olympian in just a few short years is the main thrust of Race, a journey made even more difficult by the symbolic nature of the Olympic Games he’s about to enter. Berlin in 1936 is actively hostile toward nonwhites, and Nazi propaganda minister Joseph Goebbels (Barnaby Metschurat) is intent on making the event a pageant of Aryan supremacy. This does not go unnoticed by the members of the International Olympic Committee, who are divided as to how to proceed; Jeremiah Mahoney (William Hurt) advocates for a boycott in response, while Avery Brundage (Jeremy Irons) argues that the Games are a celebration of human achievement that should remain unsullied by political protests (even if they’re against Nazism).

Biographies of athletes usually expend most of their blood, sweat, and tears on the scenes of punishing training rituals, but this movie makes it clear that being a great runner was the easiest of Owens’ challenges. He also has to contend with not only earning money for a daughter and fiancée (Shanice Banton) back home, weathering the insults of Jim Crow America, and resisting the temptations of fame, but also riding out the repercussions of talks between Goebbels and Leni Riefenstahl (Carice van Houten) over how prominent a role he should be allowed for the Olympics’ publicity. In addition, Owens must deal with Brundage’s backroom deals with the Nazis regarding the management of the Games, his rivalry with German golden boy Luz Long (David Kross), and the side drama of whether Jewish-American athletes Marty Glickman (Jeremy Ferdman) and Sam Stoller (Giacomo Gianniotti) will be barred from competition. Although the whole movie feels like a track-and-field competition, with several different events vying for space on a crowded stadium field, for the most part the ambitious screenplay by Joe Shrapnel and Anna Waterhouse does justice to all of these subplots.

Race’s biggest problem lies in its miscasting. Stephan James is a fast runner, but he doesn’t have the charisma as a leading man to carry an entire film. William Hurt and Jeremy Irons can do better than the lethargic old men they play here, and Dutch sex kitten Carice van Houten portrays Leni Riefenstahl as spunky instead of steel-willed (Barnaby Metschurat fares even worse, interpreting Goebbels as a surly skinhead pouting his way through the Third Reich). Shanice Banton, on the other hand, is well cast as Owens’ dimpled girl-next-door sweetheart, but it’s Jason Sudeikis who really steals the movie. His Coach Snyder is a hard-drinking and tart-edged man, but with a corn-fed, Midwestern decency that only surfaces when we learn how his own Olympic dreams were thwarted, and how badly he wants them for Owens in his stead.

Movies about racial injustice inflicted on African-Americans typically lean hard on irredeemable stock characters, like the chorus of hulking white louts who make life miserable for stoic and saintly blacks. But Race doesn’t shy away from exploring how both Nazi Germany and 1930s America were guilty of racial discrimination, such as when Owens is pleasantly surprised to discover that there are no segregated dorms in Germany’s Olympic Village. And when Owens himself casually refers to a previous Japanese record holder as a “Chinaman” and boasts about taking world records away from “crackers,” it illuminates how even someone decent and goodhearted isn’t immune from occasionally seeing others through the lens of his era’s racial stereotypes. The filmmakers could have hit this point more directly, but this subtext still elevates the story from being a simple good-vs.-evil fable into a nuanced portrait of a singular talent who triumphed during a complex time in history. Despite its shortcomings, Race is still a rich, engaging, and ambitious sports biopic that does right by its true story.