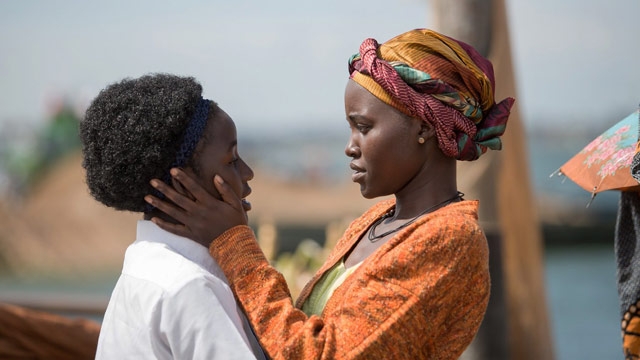 Disney’s latest sports drama, Queen of Katwe, follows the real-life story of Phiona Mutesi, a young Ugandan girl born into poverty who becomes a chess champion. The film begins in 2007: Phiona (the wonderful Madina Nalwanga) lives with her mother Nakku Harriet (Lupita Nyong’o), brothers Mugabi Brian (Martin Kabanza) and Richard (Ivan Jacobo), and sister Night (Taryn “Kay” Kyaze) in the slums of Katwe, where the family sells corn on the street to make ends meet. One day, Phiona discovers a gathering of local children who are learning how to play chess from Robert Katende (David Oyelowo). Although she is initially hesitant (especially when she is bullied by a few kids), Phiona is intrigued enough to return the next day, and quickly realizes her aptitude for chess.

Katende, lovingly dubbed “Coach” by the children, recognizes and takes a special interest in Phiona’s talent. Throughout the film, Katende navigates obstacles such as a lack of funding and prejudice in order to provide his charges with the opportunity to participate in increasingly high-level chess competitions -- all while trying to make the best decisions for himself and his own family. David Oyelowo’s performance is earnest and heartfelt, and it is refreshing to see Katende serving less as Phiona’s savoir and more as her mentor and pillar of support.

Queen of Katwe’s story arc relies on many of the tropes typical of underdog sports movies, but it handles them in nontraditional ways. Many of the problems facing Phiona and her family are unfamiliar to Western viewers, and the film touches on some heavy, yet deeply important and relevant topics that are rarely, if ever, explored in wide-release pictures. For example, Phiona is illiterate because her mother cannot afford to send her or her siblings to school. Although she eventually learns to read, her lack of formal education is integral to the message that everyone, no matter what their initial lot in life, can excel when given the right opportunities and support. The script occasionally loses its subtlety as it delivers this moral, but it is important to remember that this PG-rated film is aimed at a younger audience.

Familial bonds, particularly the mother-daughter relationship between Phiona and Nakku, are emphasized throughout the film as Phiona tries to balance her life in the slums with her goal of becoming a chess champion. Lupita Nyong’o’s talent is no secret, and it is a treat to watch her flourish in this multifaceted and complicated leading role; her portrayal of a mother who wants to nourish her children’s dreams while remaining aware of the harsh reality they live in -- and the fears that come with it -- is undoubtedly worthy of the highest praise.

Queen of Katwe is the one of the few wide-release movies to tell an inspirational story set in modern-day Africa that isn’t centered on animals or war and bloodshed. In less capable hands, Phiona’s story could easily have been a bland rags-to-riches tale that glosses over the setbacks and real-world anxieties and challenges that come with giving up one’s status quo to achieve a dream, but director Mira Nair (The Namesake, Monsoon Wedding) has managed to make a wonderful film that is ultimately thoughtful, heartwarming, and relatable. The world needs more movies about people like Phiona -- stories of smart and strong young women from all walks of life, born on different continents, who overcome difficult circumstances in order to achieve their highest ambitions.