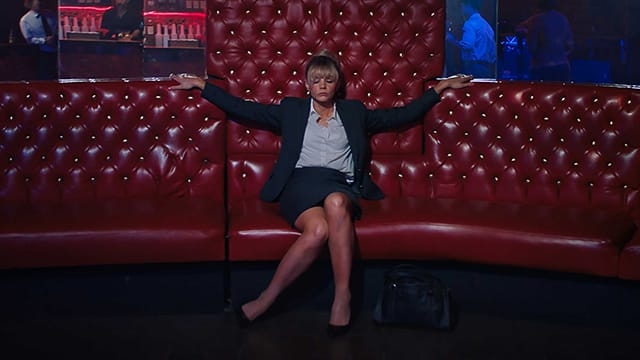 A 30-year-old woman still living with her parents, Cassie (Carey Mulligan) has never gotten over what happened to her beloved friend Nina, which caused permanent damage to Nina and forced Cassie to give up on her medical school dreams in order to take care of her friend. On a weekly basis, Cassie goes out on the town and feigns a helpless drunken state to attract the proverbial “nice guy” to come over and offer assistance. When she is inevitably brought to the guy’s residence, she is kissed and touched inappropriately despite appearing oblivious to her surroundings. After she abruptly awakens and foils their dirty plans, she convicts their conscience and their nice guy image, immediately making them uncomfortable. She keeps track of everyone who has tried to take advantage of her, meticulously keeping a tally of the wrongdoers, writing down their names, and compiling notes.

A woman on a mission, Cassie has little time to think about romance; that is until a former classmate (Bo Burnham) enters the coffee shop where she works. As the two spend more time with each other, and after Cassie finds it in her heart to forgive a contrite former attorney (Alfred Molina), her journey of revenge hits a speed bump. However, once she learns of an upcoming wedding involving the loathsome individuals who humiliated her precious friend Nina, she will stop at nothing until she can exact vengeance on the perpetrators.

On the plus side, the film boasts dramatic shots and close ups at just the right time as Benjamin Kracun’s cinematography compliments Fennell’s able direction in moving the story along in a suspenseful manner. Mulligan gets high marks for her mysterious and cunning portrayal of Cassie, and the final payoff is interesting and tense. Fennell’s direction outperforms her writing as the dialogue is often too repetitive, overusing certain words and expressions. Some may feel this makes the script more authentic; it also makes it tired. Mulligan and Burnham are unable to add enough charm to their characters to offset this flaw.

Otherwise engaging scenes are belied by awkward conversation, leaving the viewer confused as to whether it is supposed to be humorous or as uncomfortable as Cassie makes various male predators feel throughout the film. The film also falters with uneven performances among its supporting cast. While Molina and Allison Brie give solid performances, Jennifer Coolidge and Clancy Brown are not quite as convincing as Cassie’s parents. As the story moves into its final chapter, the films’ flaws are mostly overlooked by a captivating sequence of events.

Due to the subject matter, this film is not for the kids; the dialogue is explicit and at times the content is shocking and horrific, earning it an R rating. And although the cringeworthy dialogue at times stunts its development, overall, the film moves along well enough over its 113-minute run time.

Promising Young Woman has its flaws, but if moviegoers can overlook the eyeroll-inducing awkward moments and the hit-or-miss acting from some of the supporting cast, the ending is worth the wait. Mulligan’s performance, solid camera work, and an interesting plot do just enough to garner the attention of the viewer through to its riveting end.