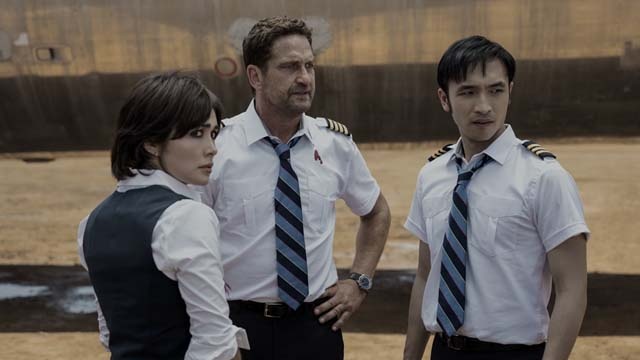 Pilot Brodie Torrance (Gerard Butler) has a full load of passengers, including Louis Gaspare (Mike Colter), an accused murderer that the FBI is extraditing for trial. But lightning forces Brodie to land the disabled plane to save his passengers. He does so successfully on a remote island, but they aren’t the only people there. Before help can find them, most of the passengers and crew are taken hostage by armed rebels. Brodie feels it is his duty to try and rescue them, with the reluctant help of Louis – the only other person the rebels don’t have.

The script by Cumming and Davis seems like it should be a standard thriller with predictable progression and outcome, but there is much more to it than that. Instead of a beaten but otherwise invulnerable protagonist, nobody pretends to be a hero; they do what they feel is best in every nail-biting situation. While Butler is the lead, it is more from a storytelling point of view than anything else. The mostly faceless passengers have an individuality of character and reaction, rather than being a herd of frightened nobodies. The film also stands out from others because of its realism. Locations throughout look and feel right, as do the characters. In fight scenes, they take more than superficial damage. People trudging through a Southeast Asian jungle landscape acknowledge the presence of mosquitoes instead of being impervious to them too. The actors portraying the armed rebel thugs bring a terrifying and authentic presence and tension to several scenes.

Richet’s directorial decisions regarding camera work are an excellent addition to the tension in the film. The cinematographer understands his vision, making most of the film a shaky point-of-view movie. Usually, this approach doesn’t work and comes across as amateurish, but for the situations here, it fits perfectly. When the plane hits turbulence, the audience can almost feel it from their seats. The score, appropriately devoid of songs, adds to the anxious momentum that permeates the film from the first turbulence to the final scene.

Plane is a solid action film, pairing a plausible situation with a couple of believable characters acting more realistically than in most other movies. In a genre saturated with seemingly inhuman heroes, the story is a timely departure.