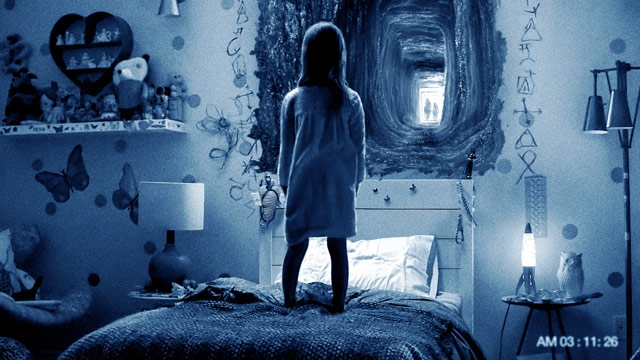 Depending on the person you ask, Ghost Dimension qualifies as either the fifth or sixth film of the Paranormal Activity franchise, with 2014’s The Marked Ones being the only outlier/spinoff film to not follow the vague plotlines bestowed by the original 2007 flick. A key cog in the explosion of the found-footage genre as low-risk, high-reward projects for studios, Paranormal Activity has carved out an impressive plot in the recent horror landscape. Touted as the last entry in the long-running series, Ghost Dimension can’t conjure the energy of its predecessors and is a wholly forgettable “finale” of a fading-fast franchise.

Ryan (Chris J. Murray), his wife Emily (Brit Shaw) and their industrious 7-year old daughter Leila (Ivy George) are readying for Christmas at their gorgeous Santa Rosa, Cal., home. They welcome two guests, Ryan’s brother Mike (Dan Gill) and Emily’s new-age friend Skylar (Olivia Taylor Dudley), who both plan on extended stays. While setting up holiday decorations, Ryan discovers a never-before-seen box filled with a retro-looking camera and a cache of old videotapes. He plays around with the camera and notices that it picks up peculiar images — wavy and disappearing strands of inexplicable origin. As the brothers dig deeper into the home-video collection, they discover a strange cult and two young girls (yes, Katie and Kristi from the earlier films) featured prominently. Peculiar occurrences begin happening throughout the house — based primarily in the room of young Leila. As Leila begins acting out of character and talking to her imaginary friend “Toby,” Ryan sets up cameras throughout the home to film it all, and thus begins the descent of slight oddities devolving into complete spirit meltdown as seen in all of the previous Paranormal films.

The only thing that differentiates Ghost Dimension from the rest of the series (or any of the other countless low-budget titles in the same vein on streaming sites) is that Ryan’s newly found camera toy allows viewers to see the auroras of the spirits. Thus, perhaps the most effective scare tactic of the franchise — having creepy things happen in a McMansion with no visible force behind them — is gone. First-time director Gregory Plotkin (who previously worked as an editor in the franchise) has convinced himself that the audience is dumb enough to be scared by this gimmick, and that the mere sight of a malevolent “spirit” will send our hands clamoring over our eyes. Spoiler alert; horror does not quite work that way. What made these films viable in the first place was their believability, or at least the willingness of viewers to suspend disbelief long enough to project themselves as suburbanites haunted by an unseen evil. Corny CGI tricks and less-than-stellar special effects take the authenticity right out of the film, and leave you checking your watch as frequently as you check the timestamp in the corner of the “found footage.”

Perhaps the worst thing about Ghost Dimension is that it’s just plainly not a scary film. The jump-scare tactic has been done to death in this series and Ghost Dimension takes little care in planning out its jumps carefully. Whenever a camera shot lingers slightly on the corner of a room, you can fully expect the pop-out to happen just as it pans away. Plotkin does little to neither create an air of tension nor raise the stakes above a murmur in the way director/screenwriter Oren Peli did in the original film. What once was a chilling spectacle of a series has become an unimaginative and tedious mess. Here’s hoping the spirit of Paranormal Activity rests quietly after this one.

The Croods: A New Age

The Croods: A New Age