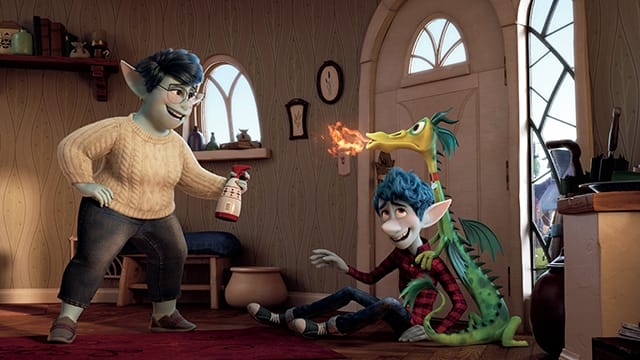 Director Dan Scanlon (Monsters University) takes us Onward in this animated fantasy crossover tale of two brothers with one last chance to fill a void they’ve felt for years. The script by Scanlon, working with Jason Headley and Keith Bunin, teaches several great lessons, doing so in a way that most children will understand.

Ian (Tom Holland) and Barley (Chris Pratt) are the Lightfoot brothers – a pair of elf siblings that couldn’t be more different. Ian is shy, reserved, and scared of everything. Barley is happiest when he is adventuring, whether it is in his fantasy game or while causing trouble in town. But everything changes on Ian’s sixteenth birthday, when the two receive a gift left for them by their deceased father – a staff capable of bringing him back to them for 24 hours. Unfortunately, the magic goes wrong, so the two must go on a quest to complete the spell before time runs out on their chance to see their dad one last time.

The coming-of-age story is tight, with few moments that seem like unnecessary filler. It has a stable beginning, middle, and end, developing fully as the tale progresses. Best of all, there are lessons about friendship, family, loyalty, love, and believing in oneself, in a script that can be thoroughly enjoyed by both children and adults. An additional plus is that these are all neatly wrapped up in an enthralling and entertaining fantasy setting with modernized mythical creatures. This feature makes the characters seem fresher than many other animated films.

By now, Pixar has their style so neatly in a box that the only flaw is their consistent one – some scenes move too quickly to keep up with them. Other than this, the animation is crisp and clean.

The film’s most significant shortcoming is the failure to account for audiences too young to read. There are several times that Ian refers to lists, and what is on them isn’t always read aloud. Those below reading level will miss out on some essential components of the story, particularly the ending. Since this is a film for kids, it seems like a huge oversight.

Onward is an altogether entertaining film with great lessons that can be enjoyed by any age, but best by anyone of reading age and older. It is thrilling without being overly scary, and it’s sure to pull laughs from the audience while leaving them feeling that believing in themselves is no fairy tale.