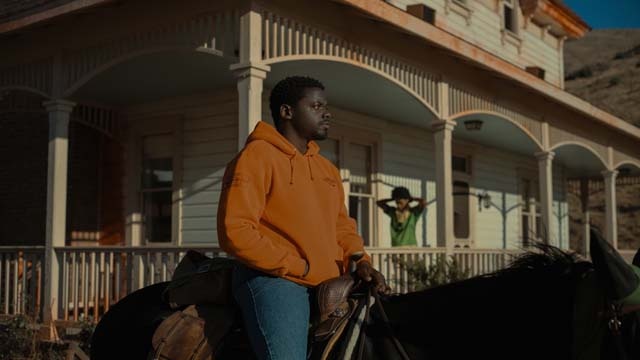 Writer/director Jordan Peele (Get Out) presents Nope, yet another mind-bending film. But even with a great cast and phenomenal camera work, the movie is a rare miss for the celebrated creator.

OJ Haywood (Daniel Kaluuya) and his father Otis, Sr. (Keith David) run a Hollywood-respected trained horse farm, with occasional help from OJ’s sister Emerald (Keke Palmer). But after Otis’s death in a freak event that saw metallic objects falling from the sky, OJ struggles to keep the business going. On the other hand, Emerald wants to get out – until she sees an opportunity to make a mark using the strange events at the ranch. Ultimately, their reach for the gold becomes a struggle for their lives against a force that they cannot explain.

Peele usually keeps the audience on the edge of their seats, trying to figure out the catch. In this case, he falls well short of the mark with a slow start and by keeping everything too mysterious. This includes his characters, which all clearly have backstories; but these were left on the cutting room floor, likely due to an executive decision to keep the film around two hours. Since these histories are either never explained or overexplained, it leaves the audience with no connection to them. Inexplicably, one character’s history is overexamined without it actually contributing much to the story, so it feels like a complete waste of time and resources. More creative editing could have shortened that to leave room for at least better development of the Haywood siblings. It is sad, because Kaluuya and Palmer give wonderful performances and could have added much more to these characters. Add to this the pacing issues; the story starts in an organic way showing everyday life, but then it drags on too long and well before the meat of the tale begins.

Contrary to the slow, enigmatic script, the technical work is brilliant. Outstanding cinematography using lighting, color, and creative camera angles keeps the audience enthralled, waiting for what comes next, and sometimes right on the edge of jumping out of their seats. There is a consistent feeling of “did I just see what I thought I saw?” which gives the film an eerily realistic horror vibe. Peele scores points here with his careful, noteworthy direction, if not with his meandering script that rarely gives viewers any reveal into anything.

Nope is entertaining enough if attendees don’t care much about background or anything resembling history, climax, or closure. Once it gets going, it is a good popcorn-muncher and probably worth a view. As for watching it a second time, without a director’s cut that adds to the tale, the answer is obvious. Nope.