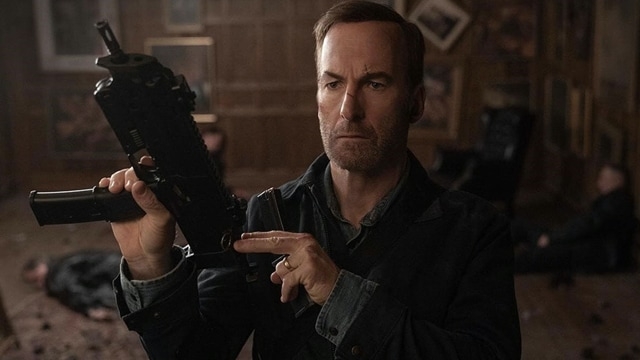 Hutch Mansell gives up a life of action and violence for the mundane 9-5 job and increased family time, only to see his past catch up with him in Ilya Naishuller’s Nobody, a cleverly executed action thriller. Naishuller (Hardcore Henry) provides able direction to a script written by Derek Kolstad (John Wick), and Bob Odenkirk leads a talented cast of actors; this results in a highly engaging and enjoyable movie, especially for fans of the genre.

Hutch (Odenkirk) loves his family dearly, and when he discovers a couple of burglars prowling in his home one night, he is tempted to wreak havoc on the perpetrators who have threatened his wife (Connie Nielsen) and kids’ safety. After doing some research to track down the man and woman who ended up with his watch and daughter’s bracelet, Hutch is riding the bus back home when a group of menacing and intoxicated young guys board the bus and immediately threaten all passengers, including a teenage girl sitting near Hutch. The fight that predictably ensues leaves Hutch banged up and the loathsome gang of troublemakers entirely incapacitated. But when one of them ends up dying, news travels all the way to his older brother Yulian (Aleksey Serebryakov), keeper of the Obshak, and in charge of Russian mob funds. When he gets wind of all that has transpired, he lances an all-out attack on the new family man. Hutch must think fast, coordinate with his contacts from the government and his retired-FBI agent father (Christopher Lloyd) while always trying to stay one step ahead in order to protect his family.

Naishuller moves the story along at an ideal pace — not too fast that it’s hard to keep up, and not too slow that it drags. Actions scenes are crisp and credible for the most part, considering the almost incredible character of Hutch Mansell. The questionable choices stem from the uneven musical selection, which contains both apt action music but also more classic choices that function at times and in other moments seem out of place. There is also some overkill in establishing that Hutch has become a man of routine. Sometimes it’s paramount that viewers see the opening moments of a movie. In this case, it’s okay to skip them. Snapshots of his routine are documented throughout, leaving the first couple minutes unnecessary. Other than these minor drawbacks, the film takes the audience on a ride they will not be in a hurry to get off. Kolstad’s script is on the mark with believable dialog throughout and has just the right amount of humor and emotion. It seems expertly written for a cast which also is on top of its game. Serebryakov is excellent in his ruthless role, and Nielsen is very reliable as Hutch’s wife, despite the story not greatly involving her character. The minor roles filled by the cast are also steady and contribute to move the film along nicely. Even with the all-around good acting, Odenkirk’s portrayal of the main character is the highlight. He reportedly spent a great deal of time training for the role, and it is apparent. He gives possibly his best performance, and viewers will root for his character from the moment he steps into the kitchen.

While a few stylistic choices may be questioned, all in all Nobody is a film to be enjoyed. It is a thrilling, fun ride that quickly cuts through to the end of its 92-minute run time, but not without evoking thoughts of what is important in life, specifically family. Clearly, Hutch shows himself to not be the nobody that he claims to be. And the film isn’t nothing either.